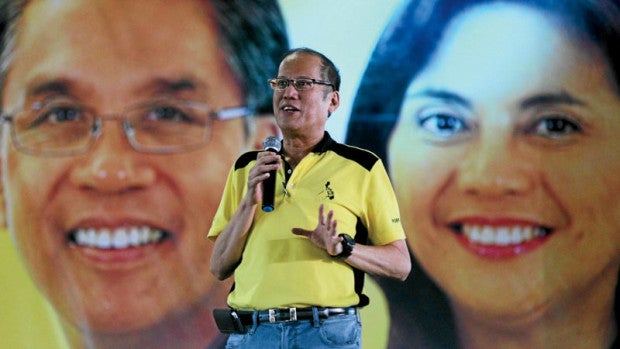 PRESIDENT Aquino on Tuesday said he would not allow his father’s death and those of other martial law victims to be in vain with the possible return of an iron-hand rule as Davao City Mayor Rodrigo Duterte, styling himself as a strongman in the election campaign, continues to be the popular choice among the electorate.

In a stump speech in Iloilo City, Mr. Aquino, who is also the commander in chief of the armed forces,  called for unity among those who want to protect the country’s hard-fought democracy.

Among these, the President said, were statements wherein Duterte said he could not be impeached because he would first abolish Congress, as well as his dismissive attitude towards the laws of the land and his declaration that he would order the killing of criminals as part of his antidrug, anticrime and anticorruption platform.

With four days to go before May 9, President Aquino has become more specific in describing Election Day as a choice between democracy and the return of martial law.

“After my father was killed, I told myself that I couldn’t bear to see that nothing will change. I had taken a stand during martial law. I cannot accept that my father and our thousand other fellowmen would die in vain,” the President said in Filipino.

The President’s father, Sen. Benigno Aquino Jr., was the leading opposition figure against the dictator Ferdinand Marcos. His assassination on Aug. 21, 1983, led to anti-Marcos protests that ultimately toppled  the dictatorship that was marred by massive human rights violations and corruption in the country.

The Marcoses fled the country on Feb. 25, 1986, but returned during the presidency of Joseph Estrada, now Manila mayor.

Mr. Aquino reiterated that he wondered why—and it pained him to see—those acting like dictators are the ones rating high in the poll surveys, right on the 30th anniversary of the

“Why is it, that now we are free, those who are acting like dictators are the ones rating high? Something’s not right. What happened?” the President said.

President Aquino said he had been receiving text messages, non-stop, from people worried about the possible return of martial law—from members of the media, the religious, ordinary citizens.