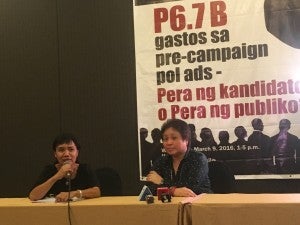 MANILA — The Bureau of Internal Revenue (BIR) has started its audit of the campaign funds received by candidates, and ordered media outfits to submit detailed reports of these candidates’ advertising expenses.

BIR Commissioner Kim S. Jacinto-Henares on May 3 ordered all media companies—television, radio, print, as well as online outfits—to report the paid campaign promotions coursed through them by candidates running in the May 9 election.  The report will allow the BIR to exempt from taxes all donations spent during the campaign period, as provided for by Republic Act No. 7166.

In a separate circular issued in March, Henares said that “only those donations or contributions that have been utilized or spent during the campaign period as set by the Comelec are exempt from the donor’s tax.”

According to the BIR, media companies must submit reports covering advertising expenditures of national candidates running for president, vice president and senator as well as party-list groups incurred between Nov. 9 last year and May 7.

For candidates running for the House of Representatives as well as provincial, city and municipal posts, media reports on their paid promotions must cover the period between Dec. 25 last year and May 7.

In their report, media companies must specify each date of telecast, broadcast, posting, as well as the frequency of airing or posting, and their duration. Aside from the names of candidates who were the subject of the ads, the report must also include the names of sponsors who paid the ads, the amounts paid, and the advertising agencies’ tax identification numbers.

Media companies have until May 22 to submit to their respective revenue district offices their reports, which must contain a declaration under oath certifying to the veracity and completeness of the information, the BIR chief said.

The reports should have both hard and soft copies stored on DVD-R forma, Henares said, adding that non-compliance would mean a fine of P1,000 and being included in the revenue office’s  priority audit program.

Last March, the BIR reminded all candidates, political parties and party-list groups that received taxable contributions or donations to file their income tax returns and to declare the campaign funds they received.

For candidates who are neither self-employed nor compensation income earners as of May 9, they must declare their taxable income by filing a short-period return for the period Jan. 1 to May 9 not later than Aug. 15.

All candidates, political parties and party-list groups must register with the BIR, issue official receipts and withhold taxes.  They must also preserve their records of contributions and expenditures for at least five years after the elections, and must produce the documents for inspection when asked by the BIR commissioner.  SFM/rga