Baguio ‘sikyu’ is now a lawyer 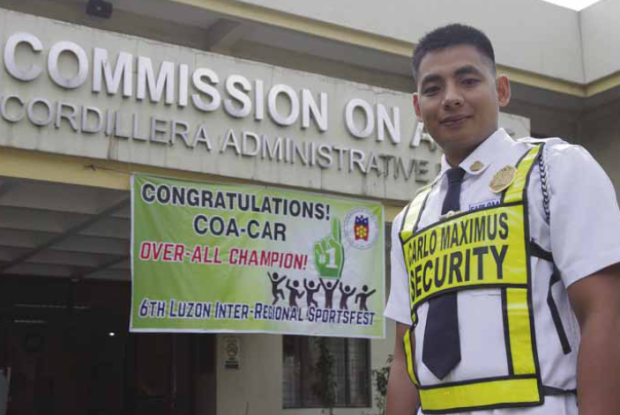 NEW LAWYER’S LAST FEW DAYSONTHE JOB Commission on Audit security guard Roy Lawagan
could be counting the days till May 15, when he quits his job and joins a law firm inManila. Lawagan joined
some 1,700 new lawyers when he passed the 2015 bar exams. RICHARD BALONGLONG/INQUIRER NORTHERN LUZON

BAGUIO CITY—One of the country’s 1,731 new lawyers quietly celebrated with his family on Tuesday.

The following day, he reported back for work at the Commission on Audit office in La Trinidad, Benguet province, wearing his uniform.

Roy Lawagan, who considered passing the bar an early gift for his 27th birthday on May 11, said he was staying on in his job until May 15.

After that, he was taking up a cousin’s offer to work at a law firm in Manila. “I will go there to gain experience,” he said.

While working as a security guard, Lawagan attended night classes on his first year at law school. It was tiring, he said, since his wife was pregnant with their daughter, now 4 years old.

“Being a lawyer was my father’s dream,” he said. The fourth in a brood of nine, Lawagan said some of his sisters had graduated with degrees in political science but did not pursue law.

Lawagan, who traces his roots to Sagada in Mountain Province, completed his criminology course at University of Baguio and finished his law studies at Saint Louis University.

When he did not pass the 2014 bar exam despite having enrolled in a review center, Lawagan decided to review on his own for the 2015 exam given in November last year. TVJ

He passed away before passing the bar, but dream lives on

Read Next
Drilon leads race for Senate Magic 12
EDITORS' PICK
Percy Lapid’s kin: ‘We demand that his cowardly assassins be brought to justice’
Nothing’s certain so here’s how everyday Filipinos can make the most out of their Plan B
Do all the things you do, faster
PNP vows to bring justice for slain Percy Lapid; says probe underway
House energy committee chair Arroyo bats for cheap electricity
‘Seniority’ requirement despite vacant posts in DOH bothers senators
MOST READ
Student stabs teacher dead in Samar town
Trixie Angeles quits as press secretary due to health reasons
Not rehired?: Trixie Angeles not on list of reappointed Cabinet execs
Heart Evangelista to stay abroad ‘indefinitely’: ‘Hindi muna ako babalik’
Don't miss out on the latest news and information.