Binay hits Roxas for snide ‘peace be with you’ remark 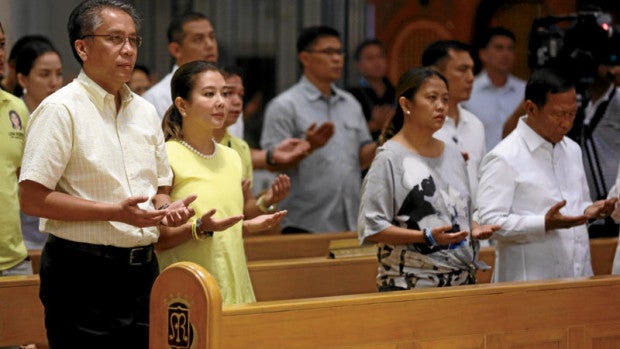 Vice President Jejomar Binay said he was not pleased about the snide “peace be with you” statement from former interior secretary Manuel “Mar” Roxas II after both of them attended Mass for the signing of the truth covenant on Monday.

In an interview in Antique after his motorcade there on Tuesday, Binay was asked for his reaction about Roxas’ offering of peace to him after both of them attended the Mass at the Manila Cathedral on Monday for the signing of the covenant for peaceful and honest elections.

Although seated apart on the same pew, Binay and Roxas shook hands during the offering of peace. Roxas’ wife broadcaster Korina Sanchez and Binay’s daughter Sen. Nancy, who were also seated there, also shook hands as a sign of peace.

READ: Nancy says awkward at Mass with Roxas, hopes for end of animosity

Roxas jokingly said when asked about his offering of peace to Binay: ““I wish you peace kasi mapepreso na siya eh (because he will be jailed). So I wish him peace in his heart.”

Binay said he found it ironic that Roxas would offer him peace and yet criticize him later after Mass.

“Yon na nga the irony of it… Nagdasal ka na rin lang, pagkatapos may banat ka pa,” Binay also said in another interview in Capiz – which happened to be Roxas’ hometown – where he held a motorcade.

(You say a prayer then hurt another person. What’s up with that?

That’s the irony of it…you say a prayer then you make a snide remark.)
Roxas had criticized Binay for corruption, after Ombudsman Conchita Carpio Morales found probable cause to indict the vice president and his son dismissed Makati mayor Junjun Binay for malversation, graft and falsification of public documents for allegedly rigging the procurement for the design and construction of the allegedly overpriced Makati car park building.

Junjun is now facing the charges before the Sandiganbayan, while the Ombudsman has yet to charge the vice president because he is immune from suit until the end of his term.

Binay was also the subject of a year-long Senate investigation into the millions of kickbacks Binay allegedly received from overpriced deals in Makati when he was mayor.

Binay and Roxas, now presidential contenders, had been at odds since Binay beat Roxas in the 2010 vice presidential race. CDG