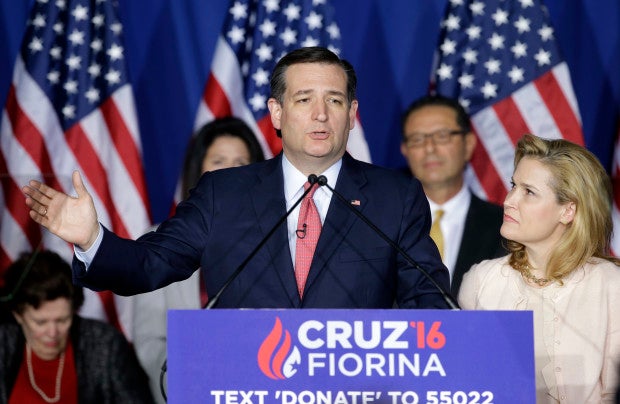 Cruz’s campaign said he plans to drop out of the race Tuesday following his loss in Indiana’s Republican primary to Trump.

Cruz’s campaign placed its hopes on a data-driven effort to turn out conservative evangelical Christians who had opted out of recent presidential elections. Increasingly, he would modify his travel schedule to go where data showed there might be pockets of untapped supporters.

Trump crushed his Republican rivals in Indiana’s primary Tuesday, bringing him to the brink of outright victory in the presidential nomination race and dashing the hopes of a movement bent on stopping him.

“Thank you, Indiana!” Trump tweeted as the race was called in his favor and he romped to a seventh straight state-wide victory.

The Democratic race was initially too close to call, with Bernie Sanders taking a razor-thin lead over former secretary of state Clinton based on 25 percent of precincts reporting.

Both Trump and Clinton were betting on Indiana to put them one step closer to locking up the White House nominations.

The latest contest in the 2016 White House race was also seen as a day of reckoning for the “stop Trump” movement.

Cruz had been hoping to use the midwestern state as a firewall, blocking Trump from receiving the 1,237 delegates needed to secure the nomination ahead of the Republican convention in Cleveland in July.

But the bombastic real estate mogul — who has thus far defied all political logic to lead the Republican race — swept the arch-conservative senator aside.

“Lyin’ Ted Cruz consistently said that he will, and must, win Indiana. If he doesn’t he should drop out of the race-stop wasting time &amp; money,” Trump taunted in a tweet.

Should Trump win all 57 delegates at stake in Indiana, he will need just 40 percent of remaining Republican delegates to reach the magic number of 1,237 needed to avoid a contested party convention.

Clinton, 68, is far enough ahead overall that Sanders’ only hope now lies in the unlikely scenario of her failing to win a majority of delegates in the primaries, in which case her nomination could be contested at a Democratic convention in July.

But regardless of the outcome in Indiana, Clinton has already pivoted toward Trump.

“I’m really focused on moving into the general election,” she said confidently Tuesday in West Virginia.

“That’s where we have to be because we are going to have a tough campaign against a candidate who’ll literally say or do anything,” she said of Trump. “We’re going to take him on at every turn.”

‘Staring at the abyss’

Trump raised the recent National Enquirer story in his interview with Fox News.

“This is just kooky,” an irate Cruz shot back while stumping in Evansville, Indiana, branding Trump a “pathological liar.”

“The man is utterly amoral,” said Cruz, lambasting the frontrunner as “a caricature of a braggadocious, arrogant buffoon who builds giant casinos with giant pictures of him everywhere he looks.”

“We are staring at the abyss,” Cruz warned.

Cruz now has an extremely steep road ahead to block Trump.

Until recently, Indiana was widely seen as a good state for the senator, who has performed well in primaries dominated by conservative and evangelical voters.

Observers say a Trump victory raises serious questions about whether Cruz can still win other states where he was thought to be favored, such as Nebraska, Washington, Montana and South Dakota.

“Very hard to see how Trump doesn’t get to 1,237 now,” tweeted the leading statistician and election analyst Nate Silver of the blog FiveThirtyEight.

The frontrunner has so far amassed 1,002 delegates prior to Indiana, according to CNN’s tally. Cruz is at 572 delegates, while Kasich trails with 156.

The map currently favors Trump, who is polling well ahead in the largest states yet to vote — California and New Jersey.

Clinton needs only 21 percent of remaining Democratic delegates to win her party’s nomination, but she has declined to call on Sanders to drop out.

“He has every right to finish out this primary season. I couldn’t argue with that,” Clinton said.

Sanders, a self-proclaimed democratic socialist senator representing Vermont, has indicated he will remain in the race through California.