Nancy says awkward at Mass with Roxas, hopes for end of animosity 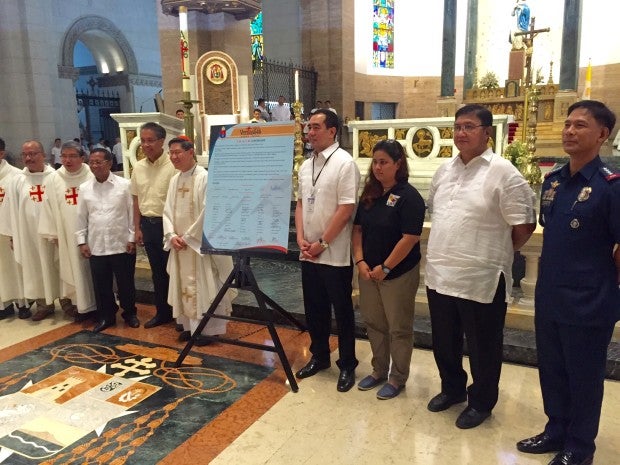 Sen. Nancy Binay on Monday said she hoped the opposing candidates could move on from animosities after the May 9 national elections, although she admitted being in an awkward situation during a church Mass with Liberal Party standard-bearer Manuel “Mar” Roxas II for the signing of the covenant for truthful and honest elections.

The daughter of Vice President Jejomar Binay made the statement after her father and Roxas attended Mass at the Manila Cathedral for the signing of the covenant a week before the May 9 polls.

“I’ll just share kung ano ‘yong pinagdasal ko (what I prayed for). For me, to give us strength na pagkatapos ng halalan magkaroon ng (that after the elections, there would be) true forgiveness,” Sen. Binay said.

The vice president was indicted for graft, malversation and falsification of public documents by the Office of the Ombudsman under this administration for allegedly rigging the procurement of the supposedly overpriced Makati car park building.

Her father was also the subject of a yearlong Senate investigation into allegations he received millions of kickbacks from overpriced deals in Makati when he was still the city mayor.

Her brother Junjun was dismissed as Makati mayor while facing graft and falsification charges over the alleged rigging of bidding under his term.

Sen. Binay said she hoped to move on from being hurt by this administration and admitted that her family may have also hurt others.

Since resigning from President Benigno Aquino III’s Cabinet and assuming the role of the opposition, Vice President Binay has called him “palpak” and “manhid” for his failure to uplift the lives of the poor.

“Kasi ‘di ba kahit naman kami siguro may nasaktan din, sila nasaktan nila kami. Sana pagkatapos ng halalan wala na lahat ‘yon, ‘di ba? (My family may have also hurt others, while [this administration] has hurt us. I hope that after the elections, the hurt would also disappear.) Let’s all move on and help our country,” Sen. Binay said.

During Mass, Vice President Binay and Sen. Binay sat on the same pew but a little away from Roxas and his wife broadcaster Korina Sanchez.

The four shook hands during the rite of peace at Mass.

Sen. Binay admitted that there was an awkward situation there because they did not expect to be sitting beside Roxas and Sanchez.

(It was a little bit awkward in the beginning. But, I guess when you’re attending the Mass and listened to the homily, it seemed the awkwardness vanished. As you saw, when we reached the ‘peace be with you’ part, we even approached them.)

“Hindi naman ini-expect na magkakasama kami sa iisang upuan (We did not expect that we would be sitting on the same pew ),” she added.

However, Sen. Binay said she learned from her father not to hold grudges against anyone.

“I guess natutunan ko sa daddy ko na huwag magtanim ng sama ng loob (I learned from daddy not to hold grudges against anyone). You just have to move on,” she said. RAM