Trillanes warns of coup, other means to unseat Duterte if he wins 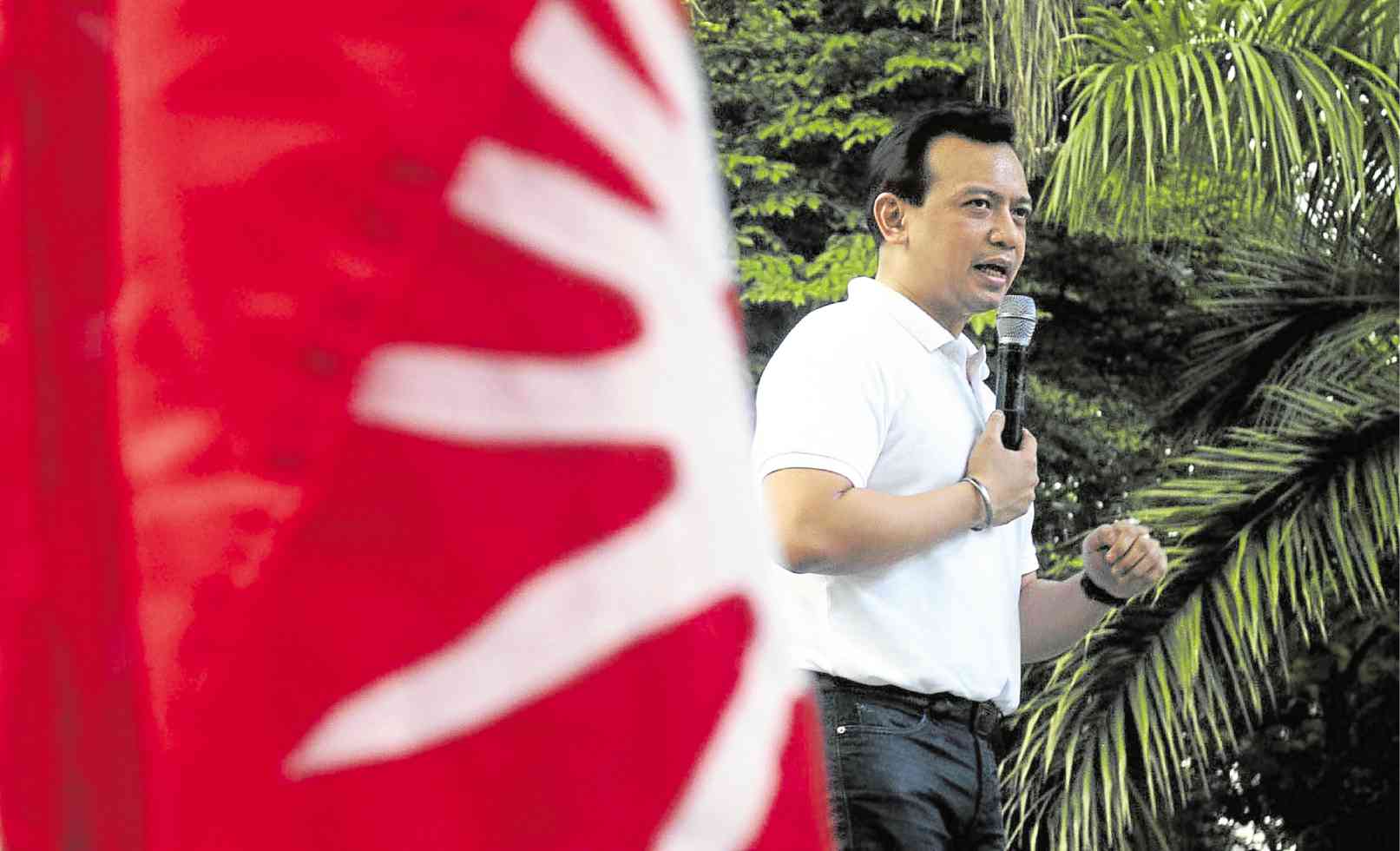 SEN. ANTONIO Trillanes IV on Tuesday warned of a possible coup d’ etat or other “creative ways” to unseat a president in the event Davao City Mayor Rodrigo Duterte wins the presidency and the allegations that the mayor had undeclared wealth proved to be true.

Speaking before the Foreign Correspondents Association of the Philippines, Trillanes expressed the belief that “people will have remedies to take back what they gave” in the event Duterte wins the presidency “and will find creative way of doing that—even before (the mayor) formally assumes (the presidency).”

Trillanes said the results of the May 9 elections will be known by the middle of the month and the next president comes in only on June 30.

Trillanes said he did not know how people would react if they felt they were shortchanged by Duterte if the latter wins.

Asked whether he would take a lead in this “creative” response of the people, he said: “I will be the voice of this particular advocacy. I will do what I can to pound the truth into the hard heads of the Dutertards and Duterte supporters until they accept they have been deceived.”

This was why, he told reporters, he was “going out of my way” to inform people about Duterte’s alleged hidden wealth as well as  “unmask” the mayor as election day neared.

Trillanes has accused Duterte of having undeclared bank accounts that saw transactions of P2.4 billion in a nine-year period. He said the mayor has a joint account with his daughter Sara at the Bank of Philippine Islands (BPI) in its Julia Vargas branch in Pasig City with transactions that included P227 million.

The mayor initially denied Trillanes’ claim but eventually admitted he had a bank account at the BPI branch.

Trillanes dared Duterte to sign a waiver to open his bank account at BPI but Duterte’s lawyer the other day said the bank had asked for seven days—which would fall after the elections—to act on his special authority to release the mayor’s bank records.

Trillanes had produced an affidavit naming his informant—a certain Joseph De Mesa—as the mayor had demanded.

At the Focap meeting held at the Diamond Hotel in Manila, the senator  maintained he had “disturbing and very alarming” information against Duterte but this still needed “further validation.”

“I just hope we get it out on time,” Trillanes said.

If people “will not open their eyes” and Duterte wins the presidency, Trillanes admitted “the fight will be more difficult” because the mayor would then have the powers of the presidency “to protect himself and God knows what.”

Asked whether a Duterte presidency would see the return of coup plots against the elected government, Trillanes, a former Navy officer who took part in coup attempts against Gloria Macapagal-Arroyo, did not discount such possibility.

“I’m saying this from the point of view of someone who has been there before. Let’s just say it’s found to be very easy to recruit people for such military intervention and I believe people will be longing and clamoring for that similar to that creative way they did back in 2001,” Trillanes said, referring to the second people power uprising against then President Joseph Estrada.

Asked whether he was getting a sense that there may be rumblings against Duterte, he said there was a faction in the military that was “averse to any form of power sharing with the Communists that Duterte was proposing.”

“I don’t know how deep that aversion is, but definitely there is,” the senator added.