Miriam on Digong: Why many bank accounts? 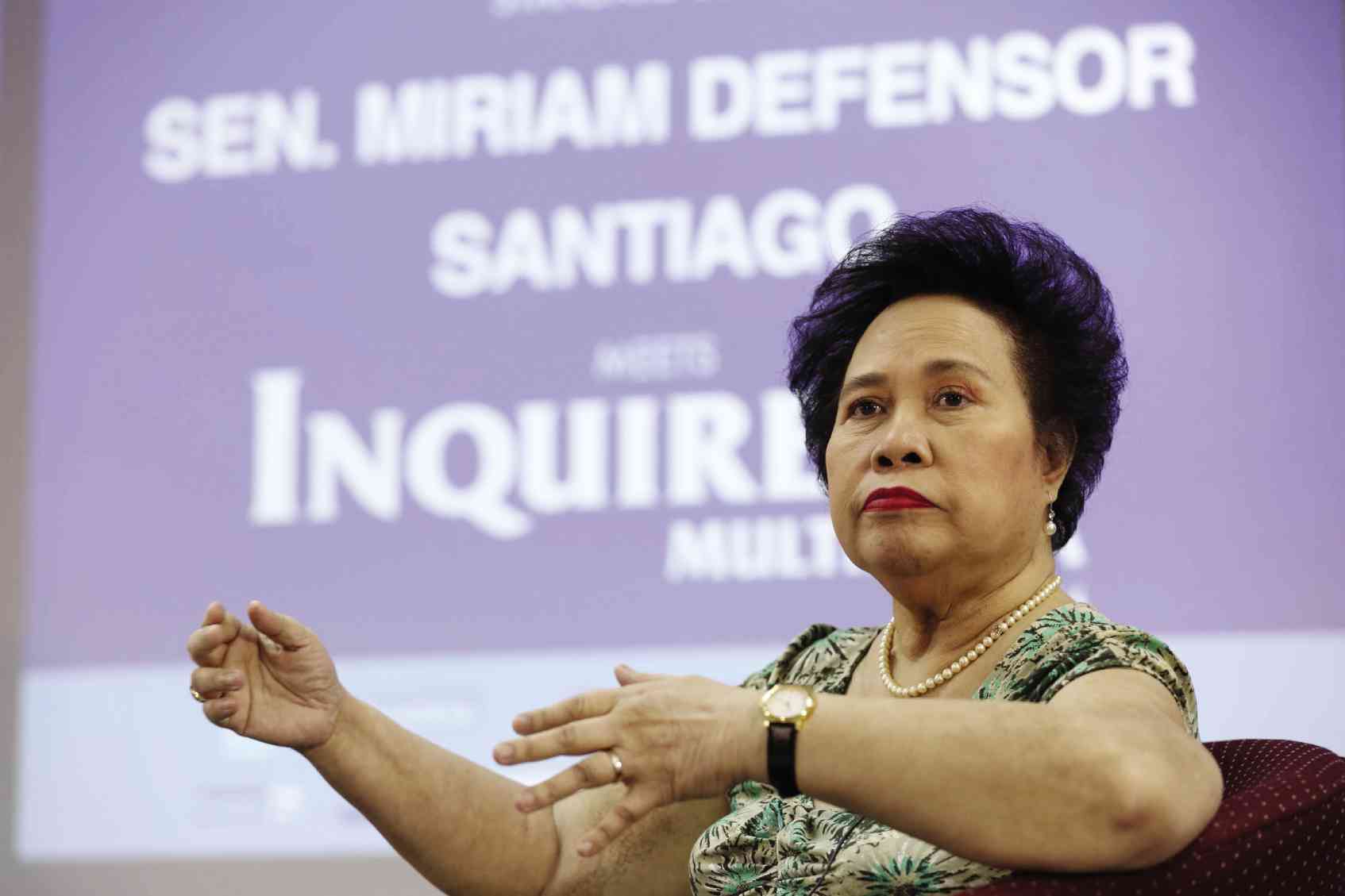 SPEAKING OUT for the first time against Davao City Mayor Rodrigo “Digong” Duterte whom she previously called a “good friend,” Sen. Miriam Defensor Santiago assailed her rival for his multiple bank accounts, unreasonable statements and apparent disregard for the rule of law.

Santiago, a presidential candidate like the mayor, expressed shock at the exposé of Sen. Antonio Trillanes IV that Duterte had 17 accounts in three bank branches in Metro Manila, including one account that allegedly received P227 million in deposits in 2014.

The 17 joint accounts of Duterte and daughter Sara at the Bank of the Philippine Islands (BPI) branch on Julia Vargas Avenue in Pasig City, BPI Edsa Greenhills and Banco de Oro Unibank in Mandaluyong City had P2.4 billion in transactions from 2006 to 2015, according to Trillanes.

“Why are there so many bank accounts? What did he use them for?” Santiago asked at the Meet Inquirer Multimedia Forum on Tuesday.

“He didn’t use them for houses because every time I visit him in Davao (City) his houses are always very humble,” she said.

Trillanes also claimed that Duterte did not declare the P227 million in deposits in one account at BPI Julia Vargas branch in 2014 in his statement of assets, liabilities and net worth.

Bank records provided by Trillanes showed that Duterte received seven deposits amounting to P193.7 million in one of his BPI Julia Vargas accounts on his 69th birthday in 2014.

The mayor, who earlier dismissed as mere fabrication the senator’s claims about the BPI Julia Vargas account but later acknowledged its existence, said the deposits were birthday gifts.

Santiago went on to assail Duterte’s various controversial statements, such as those espousing strong-arm tactics to fight criminality within a few months of his presidency.

Duterte has been accused of extrajudicial killings in Davao City.

Being a fellow lawyer and a former prosecutor, the mayor should ensure that people have the right to protection of the law regardless of status, according to Santiago.

“So there are many unanswered questions in the Duterte candidacy and the nuns have good reason to fall on their knees,” she said, referring to reports that Catholic Church parishes, convents and various groups are praying and fasting for voters’ discernment for the May 9 elections.

She has spared administration candidate Mar Roxas as well as Duterte, excusing the latter’s controversial remarks as mere exaggeration.

“Mayor Duterte and I are almost alike. That’s why we are good friends,” Santiago said last December.

“(It’s) because sometimes we descend to the level of hyperbole, exaggerating to be more effective and to catch attention of the audience, but the (statements) are not likely true,” she added.

Duterte stood as one of the principal sponsors at Santiago’s 40th wedding anniversary in 2011.

The only time Santiago called out the mayor was for his off-the-cuff remark last month about regretting not being the first to rape an Australian lay minister who was gang-raped and killed in a prison hostage crisis in Davao City in 1989.

“We have to know what the law says, so we can tell whether his actuations are within the law or outside. We don’t have that kind of mass educational appeal to all our voters yet. They don’t understand,” she said.

Santiago said many saw Duterte “as a hero because he will immediately punch his enemy, when we know that is wrong. But we don’t have legal literacy. We don’t even know what is the rule of law. What is that, a ruler?”

“We don’t have much respect for the rule of law in this country,” she added.

Santiago, who said she was in remission from stage 4 lung cancer, also said she expected cheating this elections in the form of vote-buying and altered votes canvassing reports.

“The system itself is full of holes. It’s a hole-y institution because there is so much room for human intervention,” she said.

Without naming anyone, Santiago said there “might be one person seeking the presidency,” who would not accept defeat because that person “needs to pay debts.”

Santiago, who is at the tail end in all the surveys, attacked polling firms for “trending.”

She said her youth volunteers had vowed to guard her votes during the counting.

“My only worry is, if the election does not go my way these young people might go out on the streets. I counseled against that when I was cheated in 1992. I said ‘no, no street demonstrations because it might end in bloodshed between the police and the young people.’ And I don’t want it that way this time,” she said.