Thief carts away P3.2M in cash, jewelry from QC home near PNP 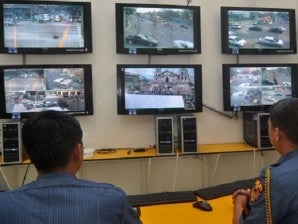 A CCTV may provide a clue to the Quezon City break-in and robbery at a home near Camp Crame on Apr. 29, 2016.  FILE PHOTO

MANILA — In under an hour, a thief managed to steal over P3.2 million worth of cash and jewelry from an unattended house, which was a few blocks away from the national police’s headquarters in Quezon City.

Police have not identified the suspect who robbed on Friday afternoon businessman Daniel Sy’s residence at the corner of North Road and 1st Avenue in Barangay Bagong Lipunan ng Crame. However, a closed-circuit television camera footage obtained near Sy’s house caught on tape a suspect wearing a black hooded jacket and pants.

The case investigator, PO3 Alvin Quisumbing, of the Quezon City Police District’s Criminal Investigation and Detection Unit, said that before Sy and his family left their house on Friday afternoon, they made sure that its doors were locked. The Sy’s residence was a few blocks away from Camp Crame.

Between 2:54 p.m and 3:36 p.m., Quisumbing said that the robber managed to enter the Sy’s residence by scaling its gates and forcibly opening its main door. Once inside, the robber destroyed the vault located at the master bedroom and took its contents.

Quisumbing said that the robber took eight pieces of gold and white gold bracelets worth P400,000; seven sets of necklace, earrings and rings worth P2.2 million; and cash amounting to P600,000.

The burglary was discovered by Sy’s son immediately after the family returned home.  SFM