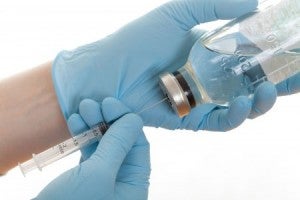 MANILA — Four people were arrested in Las Piñas on Friday night, after they sold fake anti-tetanus vaccines worth almost P400,000 in a mall parking lot.

A report to the Southern Police District, which was given to reporters on Sunday, said Danilo Oliverio Arceo, 59, of Tondo in Manila; and Parañaque residents Abdul Camid Masa Pantawagas, 35; Zapro Halid; and Khadafi Cadar; were arrested by the local police in a buy-bust operation at the SM Center along the Alabang-Zapote Road around 8 p.m.

Supt. Jenny Tecson, the SPD spokesperson, said the operation was organized after Felix Flores, operations manager of 2 World Traders Inc., went to the police station and complained about the four for selling fake Antitet, a tetanus anti-toxin.

Flores told the police his company was the sole distributor of the product, with each glass ampoule supposedly worth around P100 each.

“(Based on that information) the Las Piñas City Police created a buy-bust team with the complainant serving as the poseur-buyer,” Tecson said.

According to the report, the four were arrested after they sold Flores three boxes of Antitet containing 3,470 glass vials all in all.

“The arrested suspects were brought to the Las Piñas City Police Station for proper investigation and subsequent filing of appropriate charges,” Tecson said.

The report said the charges were for violation of the cheaper medicines law of 2008.  SFM