Miriam D. Santiago: All my life I have tried to excel | Inquirer News
Close
menu
search

Miriam D. Santiago: All my life I have tried to excel 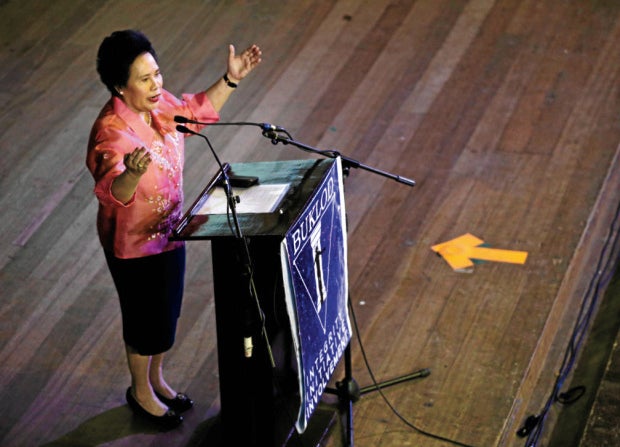 Presidential candidate Sen. Miriam Defensor-Santiago was at the hangar before the appointed time, having left home in her silver Mercedes-Benz sedan before the sky began to lighten. Running mate Sen. Ferdinand “Bongbong” Marcos Jr., came a few minutes later and was properly apologetic.

The two were meeting for the first time since they made their tandem official in October, a decision that Santiago had to defend to her supporters early on.

In the following days, the feisty senator also had to defend her decision to run an admittedly grueling campaign for the top office of the land, despite what she had described as having stage 4 lung cancer held at bay by “very advanced, very expensive” medication.

For this inaugural campaign in Laoag City, Santiago boarded the eight-seater plane slowly and laboriously, her aides unable to assist because of the narrow confines of the plane. She later explained that she also suffers from a pinched nerve that causes pain in her lower back and neck, some of the manifestations of her final stage cancer.

The unforgiving disease has not ravaged her appearance, although without makeup, her pallor showed and her hand trembled at times.

A veteran of six national campaigns including her phenomenal 1992 run that ended in one of the most controversial presidential election results ever (“She was the real winner in that elections,” Marcos declared during a campaign event on Feb. 14), Santiago made it clear she was just as serious in contesting the presidency this time.

“It’s very hard to change my mind once I decide; ask my husband,” she said, addressing rumors that she would eventually withdraw from the race. Such speculations have hounded her campaign, and might also be behind her dismal showing in presidential preference surveys which, the senator maintained, was a product of conspiracy to ease her off.

So why persist in what could likely be her last political battle while also waging a more vicious personal war against cancer?

At 70, Santiago said she has nothing more to prove. “It’s just that it’s one of the major challenges left in my life,” she said, citing as a blessing a family that includes five grandchildren and her 92-year-old mother.

“I just like to show, what I’m trying to show is, it can be done,” Santiago said.

But while she showed an unshakable certainty in her political plans, the senator confessed to questioning what fate has in store for her, “what God was telling [her]” on several instances, starting with her dream role of being a judge in the United Nations International Criminal Court (ICC).

At the time she was ready to assume the job as the first Filipino and first Asian from a developing country to sit in the war crimes tribunal.

But she had to defer taking her oath due to chronic fatigue syndrome. A year later, in June 2014, she was diagnosed with advanced stage lung cancer, and had to give up the post for which she spent years campaigning among foreign dignitaries around the globe.

“Why is it that when I’m ready to leave for work abroad, and become an OFW (overseas Filipino worker), all of a sudden cancer is here?” she asked.

She said she sat down and examined her life. “All my life I have tried to excel… I have done everything that can be done in my life,” said the Ramon Magsaysay laureate for government service. “In effect I’m already a veteran, a life veteran.”

But the veteran had never considered retiring, even after 18 years as senator. “The question I ask is, retire to what? What can I retire to? I do not play mahjong or any other form of pastime without my husband,” she said with a laugh. “When I was younger I was a swimming champion. But what will I do, I cannot swim all day,” she continued.

In 2015, Santiago announced her presidential run after getting the green light from her doctors. “I told myself, I will overcome this, even at risk to myself,” she said. “So I’m pursuing the presidency only because… from the very beginning there is nothing else I am equipped for,” she said, before adding facetiously: “I could be an astronaut but I am not equipped, so I cannot entertain that ambition.”

Continued Santiago: “I am happy with my life. I just want to do what I need to do in my vocation: ferret out the crooks and jail them for life. That has always been my prayer.” 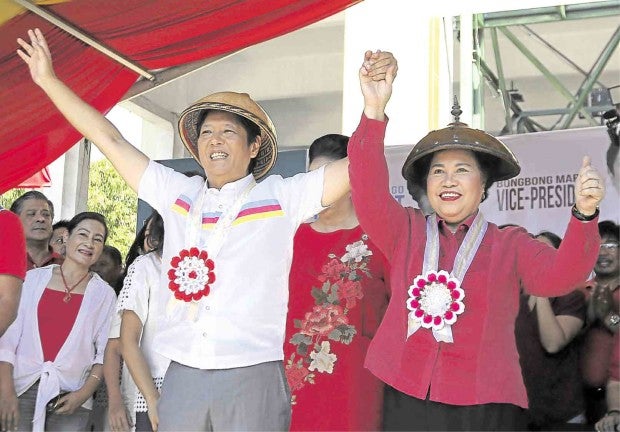 Although she felt initially depressed when told of her cancer, the senator said she is inherently an optimist. “And a sort of fatalist, too,” she added. “There’s always a certainty [in my] mind that in a sense everything is predestined.”

Once in the public eye, however, the senator’s private pains and physical frailties are set aside, and as expected, she sets out to own the stage. In campuses, students hang on to her every word as she dishes out firebrand speeches in her signature accent. Like rival Davao City Mayor Rodrigo Duterte, Santiago uses hyperbole “to be more effective and to catch the attention of the audience.”

She is also likely to harp on her academic credentials.  “These politicians invent lies against their opponents. Why don’t they study, do their homework? I see them in the Senate, they just read what their assistants give them. Their assistants should have run for office instead. Besides, are they honor students?” she asked in one of her speeches, in contrast to Duterte’s self-depracating boast that he consistently got 75 in school.

Santiago is not above twitting her opponents as well about their flaws, including their looks, using abrasive language. “Don’t have too many querida, one is enough,” she said, before adding, “I guess it’s because they’re the only ones attracted to their looks.”

In typical combative stance, she dares corrupt officials:  “I will put them all in jail. They can choose: economy class, business class or first class? But they will all go to jail!” She thundered in another speech.

But the heat, the stress of the hustings, and her cancer seemed to be taking their toll, as Santiago sounded more subdued, distracted and frail in the final presidential debate on April 24 held outdoors in Dagupan City, Pangasinan province.

For most of the three-hour debate, she paused in the middle of sentences, appearing to have lost her train of thought.  Called on to expound on her answer, Santiago stood on the podium but did not speak for several moments. Then she said, “Can you repeat the question?”

Previous campus visits were as telling: for about 10 minutes, the emcee introduced Santiago, citing her academic credentials, awards and major accomplishments as trial court judge, immigration commissioner, agrarian reform secretary and senator for three terms; her expertise in constitutional and international law, and her being cheated in the 1992 presidential elections.

Interrupted by cheers, the emcee ended his spiel: “With her signature humor and bravery, she fought back, and her cancer has regressed. Even cancer cells are afraid of her!”

Despite the expectations stoked by the glowing intro, the senator spoke for about 10 minutes, starting off with her pickup lines, lambasting corrupt politicians and stressing her core message: the next President should be chosen based on academic, professional and moral excellence. Then, with a final wave and smile, she returned to her car, eschewing “ambush” interviews and questions from her audience.

In another campus tour, she stated the obvious: “I have cancer. I told God I am ready, but He was never ready.”

But oh, when she talks of the presidency, “she was full of excitement,” said cousin-in-law, Corazon Gonsalves-Defensor, 89, who taught math to Santiago at the University of the Philippines Visayas.

The fact that her former student was running for President showed the strength of her “character and spirituality,” she said. “She depends on the Lord to protect her and to guide her,” she added.

Santiago’s determination to see her campaign through might be explained by an interview she gave the Inquirer, at the heat of her second presidential campaign in 1998. Her favorite poem, she said, was written in 1875 by an Englishman whose leg had just been amputated due to an illness.

“Before you sleep tonight, think about the words of a wise poet,” she said, reciting the last two memorable lines of the poem, “Invictus” by William Ernest Henley:  “I am the master of my fate, I am the captain of my soul.”

Santiago decries ‘conspiracy’ to rob her of victory