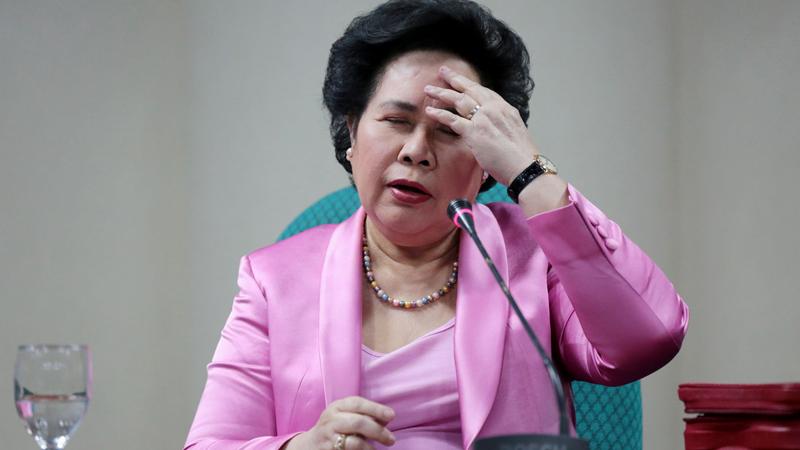 “IT WAS over the line. I think it crossed the line,” presidential candidate Miriam Defensor-Santiago said of Davao City Mayor Rodrigo Duterte’s off-the-cuff remark about regretting not being the first to rape an Australian woman who was gang-raped and killed in a prison hostage incident in Davao City in 1989.

Senator Santiago previously excused the mayor’s past controversial remarks as mere “hyperbole” but “not likely true.”

On Monday, Santiago reminded voters they could show what they thought of Duterte’s latest controversial remark come Election Day.

“If the people do not like the remark, they can express it through the ballot,” she told reporters at Bulacan State University in Malolos where she was the commencement speaker.

“But otherwise he has the right to free expression. That’s the way he expresses himself,” Santiago said.

Her running mate, Sen. Ferdinand Marcos Jr., who joined Santiago at the university although he was not a speaker, said Duterte’s rape remark was “at the very least inappropriate.”

Speaking on the sidelines of the “Agbiag ti Ilocano (Long Live the Ilocano)” gathering in Makati City, Marcos said the verdict on the mayor’s “unfiltered” speech would come on May 9.

“I think his (Duterte’s) strength comes from his record or his programs. But I guess he has always been a rough diamond. I would say so. I guess that’s why he makes those statements,” he said, referring to Duterte’s usually crude and vulgar speech.

Vice President Jejomar Binay called Duterte the “king of liars,” as he urged anew the people to help convince voters, especially Duterte supporters, not to vote for the mayor.

Liberal Party (LP) standard-bearer Mar Roxas reiterated that Duterte “is the biggest and gravest threat to our democracy,” calling him a dictator.

“I will lead the fight against Mayor Duterte. I will do all in my power to stop him because I do not want a dictatorship in our country,” an unusually feisty Roxas said at a press briefing after his campaign rally in Calbayog City, Samar province.