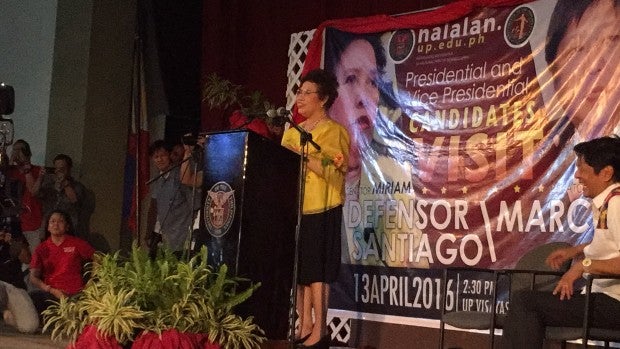 This was how Sen. Miriam Defensor-Santiago described how she felt about her consistently poor survey ratings.

“I just want to ask … Why is it that when universities are asked, from left to right it is Miriam. But if commercial surveys are conducted, I’m not even there,” she said during a campus tour of the University of the Philippines Mindanao, drawing cheers from the crowd of students and faculty.

She also slammed her rivals’ premature campaigning: “It was very obvious that before the official campaign period, they already had too many advertisements. Do you know that for every three seconds it costs half a million? Where did they get the money? They have not yet assumed office and they are already stealing,” she said in her speech that lasted for about 10 minutes.

The senator has topped most campus surveys and mock polls, including the recent University of the Philippines Diliman survey, where she was chosen by 57 percent or 405 of 710 respondents.

Her visit to UP Mindanao was her first campus visit in the region since the campaign launch on Feb. 9. It was her fourth public appearance since last week, after she took a monthlong absence for her cancer treatment.

Overall, she has made 10 public appearances, mostly in universities, since the start of the campaign. The senator is banking on her social media presence and the so-called youth vote due to her popularity among students.

Santiago’s public appearances have been hindered by her health condition. She was diagnosed with an advanced stage of lung cancer in 2014, but later said she was in “remission.”

“That’s why I’m praying if God doesn’t take me back yet, I hope He will give me the power to put these corrupt men in jail,” she said.

The senator, who is campaigning on an anticorruption platform, also told the audience that her first priority under her administration would be to conduct a thorough investigation through the Office of the Ombudsman of all the cases involving the pork barrel.

Santiago stayed on the campus for about 30 minutes, granting photo opportunities with students and faculty members.