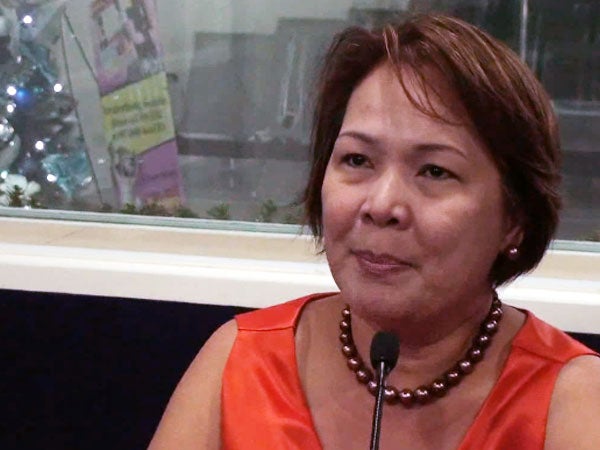 (When that happens, Duterte will accompany him to open the said account.)

Cam was the only senatorial candidate supporting the tandem of Duterte and his running mate Sen. Alan Peter Cayetano who showed up for what was billed as an “urgent” press conference here on Friday noon.

Several major networks and local reporters were told that the senatorial candidates would explain important issues hounding the tough-talking mayor during a press conference at a resort at Bagasbas Beach here, 10 km from the town center.

Cam, one of the whistleblowers on “jueteng” (illegal numbers game) issues during the administration of former President Gloria Macapagal-Arroyo, was more than an hour late for the 11 a.m. press conference. She apologized, saying she came from Naga City, 95 km from Daet or about two hours on the road.

Cam said she was alone, telling reporters  no other senatorial candidate would attend the 30-minute press conference.

She accused Malacañang, the “oligarchs” and drug lords of being behind the Trillanes’ exposé against Duterte, which she said was launched at a time when the Davao City mayor was leading in pre-election voter preference surveys. She  also noted that cases against Duterte had been filed in the Office of the Ombudsman and the Commission on Human Rights.

“Why? When Mayor Duterte was not rating well, they had nothing to say against him. Why only now [that we have only] 10 days [left before the] elections?” she asked.
Panicking

She believes Malacañang and the candidate trailing the mayor in the surveys were panicking because they do not want Duterte to win.

The administration candidate is former Interior Secretary Manuel “Mar” Roxas II of the Liberal Party while Sen. Grace Poe, an independent candidate, is second to Duterte in surveys conducted by the Social Weather Stations and Pulse Asia.

Cam said she had voted for Trillanes but  lost her respect after the senator supposedly received what she called a “mercenary fee” in the form of a P240-million Priority Development Assistance Fund from the administration when the allocation of the pork barrel had yet to be disallowed by the Supreme Court.

She said Trillanes was Malacañang’s “principal attack dog” against Vice President Jejomar Binay, the standard-bearer of the United Nationalist Alliance, when the Vice President was leading the surveys.

She also called Trillanes a traitor when he supposedly initiated a backdoor negotiation in the dispute with China over territories in the West Philippine Sea.

“You (Trillanes) are a coward, a lying coward,” Cam said.

At 4 p.m., about 5,000 people had gathered at the agroindustrial center at the provincial capitol grounds waiting for Duterte. Local organizers told reporters that the mayor was expected  at 1 p.m.

Cayetano arrived at the capitol grounds at 4:30 p.m. with his wife, Taguig City Mayor Lani Cayetano, a Bicolana from Albay province.