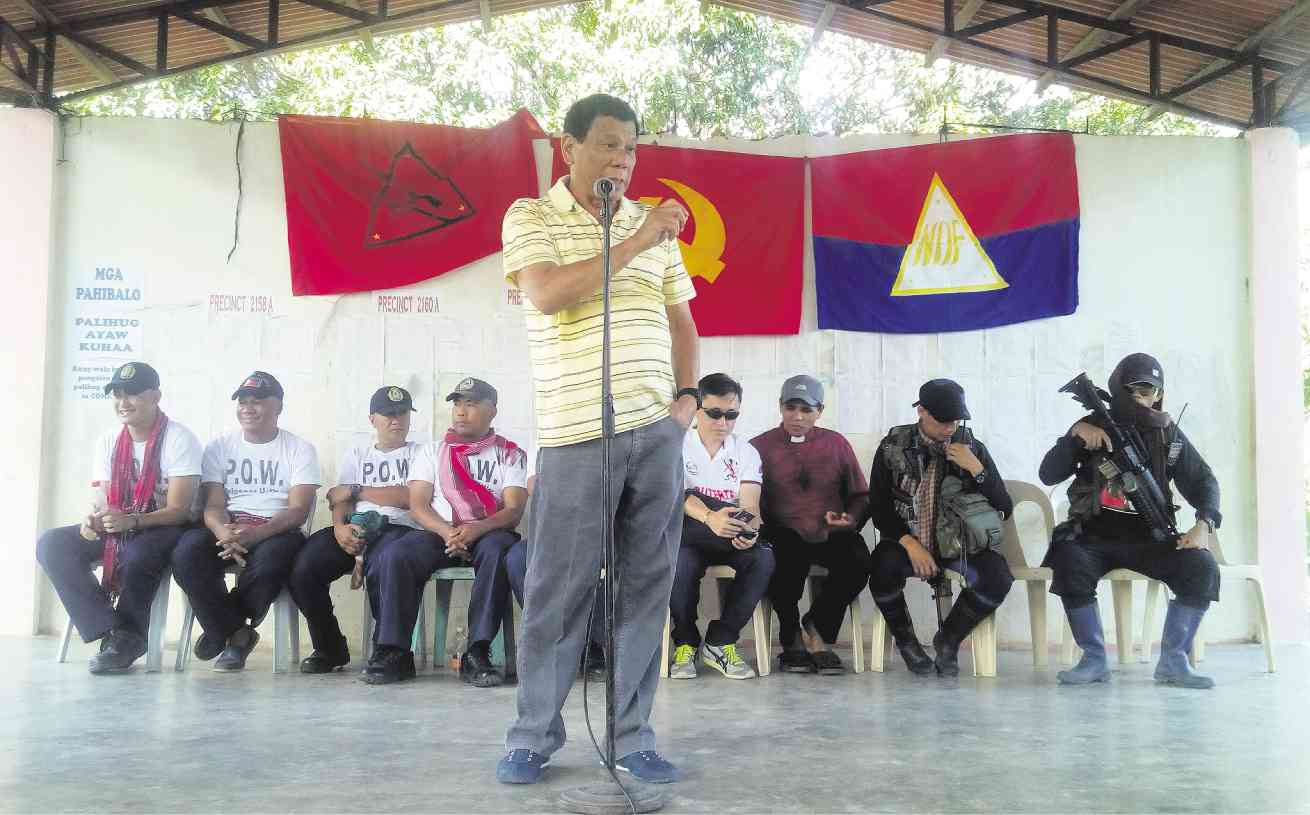 DUTERTE CONNECTION Five police officers captured by the New People’s Army are turned over to presidential candidate and Davao City Mayor Rodrigo Duterte during ceremonies in a rebel-influenced village in the city’s Paquibato District. Seated at right are two NPA members. (Related story in Across the Nation, Page A18.) BARRY OHAYLAN/CONTRIBUTOR

CONTRARY to his claim that he was a poor man, Davao City Mayor Rodrigo Duterte had at least P211 million in an account at a bank branch in Metro Manila in 2014, according to Sen. Antonio Trillanes IV.

Failure to declare an asset is a ground for an employee’s dismissal from government service.

Duterte held the account at the Bank of the Philippine Islands (BPI) branch on Julia Vargas Avenue in Pasig City jointly with daughter Sara, who used the maiden name of her mother, Zimmerman.

Accusing Trillanes as “money for hire,” Duterte denied the existence of the BPI bank account that contained P211 million. 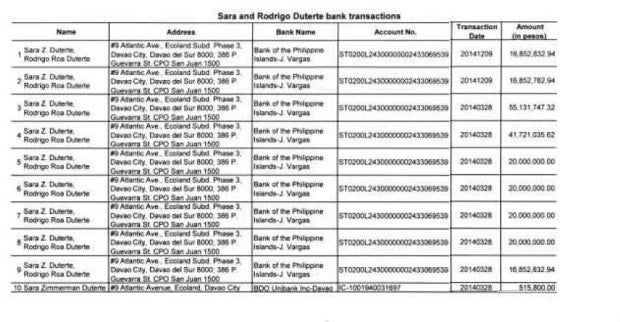 The funds were remitted to the BPI account through interbank transfers.

Trillanes, who provided the Inquirer data on Duterte’s bank accounts, said he obtained the information from various sources.

“I received the information through my various networks. Mayor Duterte who brags that he is not corrupt and is a simple and poor man should be asked to explain about his secret bank accounts that contained at least P200 million,” the senator said.

Trillanes declined to identify the source of the documents but said he believed in the integrity of the information because they were verifiable.

The account in the BPI Julia Vargas branch was separate from the bank accounts of Sara and her husband, Mans Carpio, Duterte’s sons Paolo and Sebastian and his common-law wife, Cielito Avanceña, that also contained deposits totaling hundreds of millions of pesos, according to Trillanes.

In Duterte’s 2014 SALN, a copy of which was obtained by the Inquirer, the mayor reported cash assets (in hand and in the bank) worth P13,846,732.62, but he did not disclose how and when he acquired these.

He also declared in his SALN that he acquired a piece of agricultural land in Catigan Toril, Davao City, worth P500,000 in 2014.

Duterte declared as personal properties vehicles worth P1.1 million, household appliances and furniture worth P450,000, jewelry worth P300,000 and investments worth P3.8 million.

Duterte also reported in his SALN that he had been an incorporator of Honda Cars in General Santos City since 1997 and of Poeng Yue Foundation in San Pedro, Davao City, in 2012, but he did not state any income.

The SALN also showed that the value of Duterte’s assets two years ago were higher by just a few hundred pesos than the P21,618,289.73 he declared for 2013.

The SALN is aimed at helping keep public servants honest, since the information it should contain would aid the public in keeping track of any sudden increases in a government employee or official’s wealth. 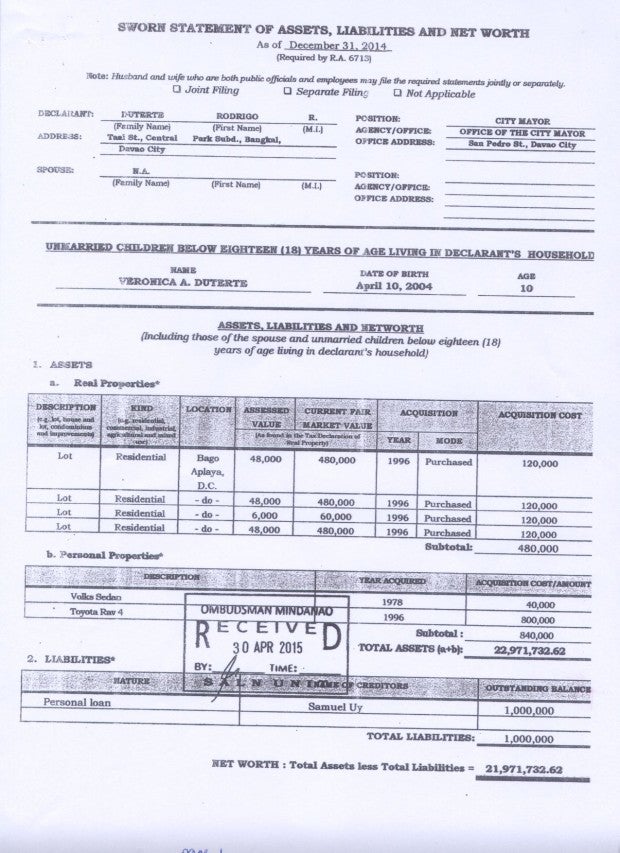 MAYOR Rodrigo Duterte’s 2014 statement of assets, liabilities and net worth 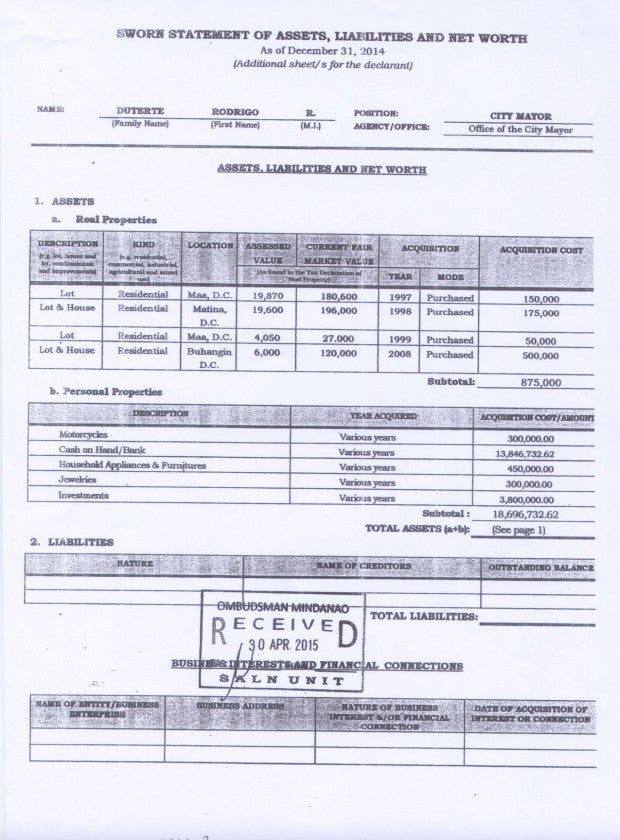 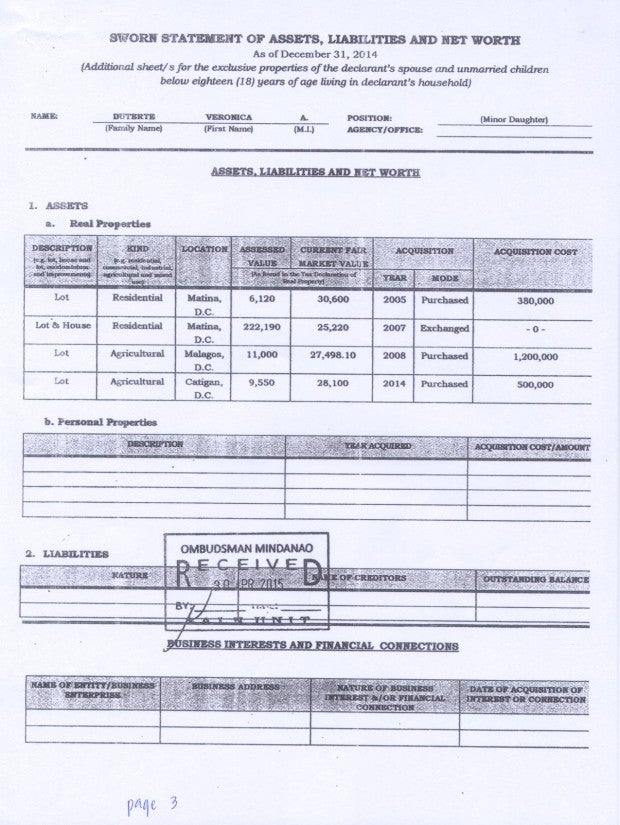 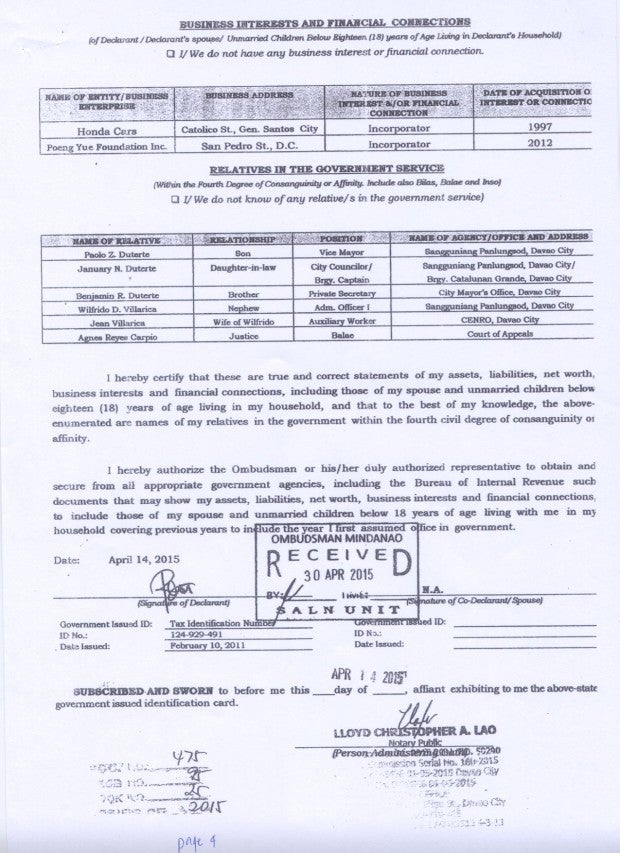