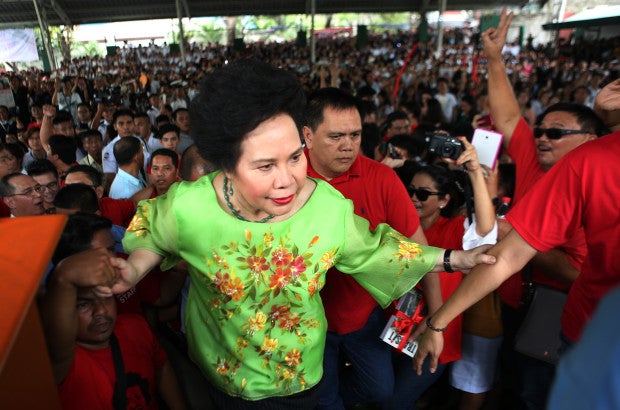 BACOLOD CITY, Philippines—While they are good friends and  all praise for each other, presidential candidate Sen. Miriam Defensor Santiago has joined  calls for Davao City Mayor Rodrigo Duterte to sign a waiver that would allow him to publicly disclose his bank records.
“Why shouldn’t he? Definitely, he should. All of us should if asked,” she told reporters on Friday when asked if her rival Duterte, the leading contender in the presidential race based on  surveys, should sign a bank waiver to make his bank accounts transparent to the public.

The other political opponents of Duterte—administration standard-bearer Manuel “Mar” Roxas II, Sen. Grace Poe and Vice President Jejomar Binay—have also challenged the mayor to sign a waiver to allow his bank accounts to be scrutinized.

Santiago said she was willing to waive her rights to bank secrecy when needed.

“There’s nothing to hide in my bank accounts, I wish there were,” she said.

The feisty senator refused to comment further on the controversy the Davao City mayor is facing: “We’ll never be able to comment diligently on these events until there is proof.”

The two presidential aspirants have always been public about their mutual high regard for each other. Santiago earlier described the mayor as one of her “best friends” while Duterte has openly expressed his high esteem for Santiago, whom he recently said was “the only qualified presidential contender” in the May national elections.

Duterte is alleged to have failed to declare P211-million bank deposits in his statement of assets, liabilities and net worth (SALN) in 2014. This is despite signing a manifesto last March with his running mate Sen. Alan Peter Cayetano pledging to open their bank accounts in a challenge to their rivals who may have ill-gotten wealth.

The mayor initially denied the existence of the bank account but later admitted that he has two accounts and  these contained thousands of pesos, not millions as claimed by Sen. Antonio Trillanes IV.  Duterte also agreed to open his bank records. RAM/rga