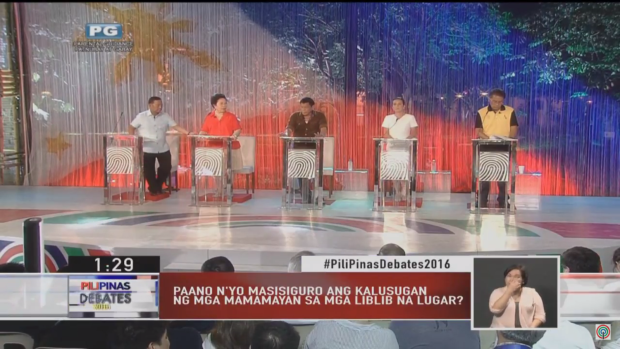 Instead of feisty mudslinging, the public on Sunday saw the presidential candidates try to assuage tearful voters asking for their solutions to gut issues.

One by one, handpicked sectoral representatives, with their problems, were introduced to the public and the candidates. Each had a chance to ask the candidates how they planned to solve the territorial dispute in the South China Sea,  the Metro Manila traffic problem, contractualization, the plight of overseas Filipino workers, insufficient health facilities and the conflict in Mindanao.

Jun Bello, a farmer whose father died because of lack of health support and facilities in their town, became emotional when he asked the candidates for solutions.

(What would be your solution to the health problem in our place? There are no doctors and medicines and there are insufficient pieces of equipment. Many have gotten sick and died, like my father.)

Bello was followed by two mothers—Amina Salon Aguil from Mindanao and the mother of Jessa, an honor student from a poor family.

Aguil and Jessa’s mother ended up crying as their story was shared with the audience.

(I would just like to ask if we will ever achieve peace in our country? Until now, we are staying in an evacuation center.)

She cried as she recounted how her mother was killed after being shot as a result of the conflict. Aguil said that there has been war in her province since she was a child and it continues now that she has children and has separated from her husband.

Jessa’s mother also could not stop crying as her daughter told the five candidates about how she wants to finish school and become a teacher.

(We had a spelling test back then. We have no money to buy paper. I was ashamed to borrow paper from my classmates that’s why I wrote on a leaf. They laughed at me. I want to go to school so I can help my parents.)

All the five candidates were asked to explain how they would help Jessa and other children like her but it was only Poe who mentioned the child in her closing speech.

(Jessa, you are the reason why I’m here because I have a child like you. As a woman and a mother, would you accept that millions of children couldn’t eat in our country?)

Poe said that there are many things that could be done for the country and she wants to be given a chance to change the situation.

Although she did not specifically refer to Jessa’s case, she emphasized how women leaders are more caring and how her relative inexperience would bring new perspectives to the table.

As for “Mang Jun,” the candidates expressed sympathy for the passing of his father.

Roxas said the current administration already has a program that would establish health stations in each village and provide for the allowance of barangay (village) health workers. He said there is also the Philippine Health Insurance Corp. (PhilHealth), which should cover their health expenses.

Binay, who said Bello’s case was truly saddening, vowed anew to provide free health care and medicines for the poor. He said he could relate to the farmer because his own mother died of breast cancer and they did not have enough money to treat her.

“So, pinangangako ko sa inyo, wala ka ng idadaing pag ako’y namuno (I promise you, you will have no more complaints when I become the president),” he said.

Santiago also spoke of the expansion of the government’s conditional cash transfer program and PhilHealth coverage.

Duterte, who has been praised for managing Davao City, shared his own experiences in providing health care for his constituents.

Poe said what was also saddening was having hospitals that do not have water or are lacking in facilities. She said that once elected President, she will ensure that poor people will not be asked to pay for health care or hospitalization and that each town would have one doctor and a scholar who will train to become their next physician.

As for the conflict in Mindanao, Santiago told Aguil that she will dismantle private armies, which she said is funded by politicians who steal money from the government.

“To stop the intumescent conflict in Mindanao, we have to adapt their customary or traditional law into our Western-style model of justice—of the justice system. For example, maganda naman yung mga ugali ng Tausog kaya ginawa na—may municipal ordinance ng isang—ng isang bayan. Pagkatapos, meron silang Sharia court, so maganda rin ang mga base (Tausogs have a good attitude that’s why there is a municipal ordinance in a town. Then, they have a Sharia court so the base is good as well),” she said.

The former senator and interior secretary blamed Congress for not approving the proposed Bangsamoro Basic Law.

Poe, who has questioned the “inclusivity” of the government’s peace negotiations said all parties should be invited. At the same time, she said development would also solve the problem.

(In Maguindanao, there seems to be no provincial hospital. That’s one of our necessities. It is also important that we take care of our infrastructure because if we are connected, it would be easier to guard our territories in Mindanao.)

Binay pointed to poverty as the cause of conflict. He said that if he becomes president, the lives of Filipinos will be uplifted.

“At yan ho ang magiging pangunahing dahilan kung paano ho tayo magkakaroon ng lasting peace sa inyong lugar (That would be the main reason for us to achieve lasting peace in your place),” he said.

Duterte, the first presidential candidate from Mindanao in Philippine history, said that the conflict “runs deep” and that it will only be resolved by talking and correcting “historical injustice.”

“I would like to tell you and I’m telling now to the Republic of the Philippines, nothing will appease the Muslim, the Moro people if you do not give them the BBL (Bangsamoro Basic Law),” he said.

Other sectoral representatives who asked questions were Carlo Montehermozo, a fisherman who lamented how the Chinese Coast Guard treats them when they are in disputed waters in the West Philippine Sea; a commuter named Perla May Suan; and overseas Filipino worker Cristy Guinto.

A news analysis from INQUIRER.net said the town hall format of the debate helped restrain the candidates from attacking each other and instead forced them to focus on the voters’ issues. RAM

READ: Format restrains candidates in first half, focuses on issues