Binay boasts of having a clear platform in debate unlike rivals 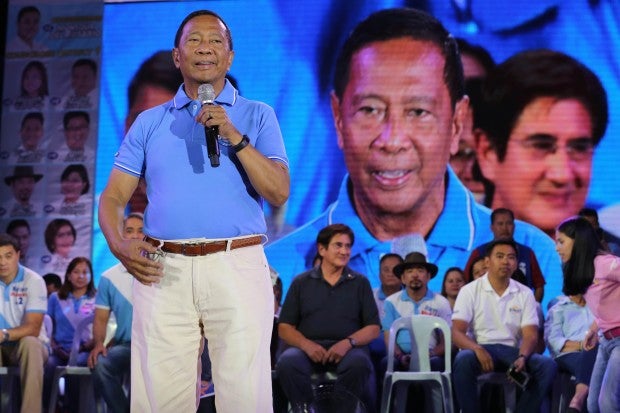 Vice President Jejomar Binay on Monday prided himself on being the lone candidate who presented a clear platform in the last Commission on Elections presidential debate.

In a statement on Monday, Binay said the Sunday debate sponsored by ABS-CBN at the University of Pangasinan allowed him to present his platform of governance that would uplift the lives of the poor.

Binay made the statement about the debate after he was ganged up on by his rivals and pinned down for alleged corruption in the  March 20 debate sponsored by TV-5 at the University of the Philippines Cebu.

Unlike the Cebu debate where the candidates engaged in mudslinging and name-calling, the Pangasinan debate had representatives from different sectors–fisherfolk, OFW, commuter, student–to ask what the candidates planned to do to help them in their plight.

Binay said the other candidates’ responses to the case studies show that they are “out of touch” with the plight of the people.

“Last night, seven very real people asked us–the candidates for President–how we can solve their very real problems. And our responses have shown that my opponents are really out of touch with our people,” Binay said.

“To the fisherman who was being driven away by Chinese soldiers from his fishing grounds in the West Philippine Sea, one candidate says she will give him a radio. To the man whose father died of illness because the health center in his barangay is always closed, another candidate says, ‘But we already paid out P75 billion in Philhealth benefits.’ In short telling the man, ‘Aba binigyan na kita ng pera, a (I’ve already given you money).’ To the little girl whose parents could not afford to buy her school supplies, another candidate says he will kill drug pushers,” Binay said.

Binay claimed he was the only one who presented a concrete solution to end poverty.

Binay promised free and quality social services as an answer to almost all the questions with regard to his plan to end poverty and violence and to help the impoverished and abused Filipinos.

“What I did throughout the debate was to offer immediate as well as long term solutions to the real problems brought to us by those real people, which are our problems, as a people and as a nation. These I intend to do, as I have done so in Makati, with compassion and competence, and always with the best interest of the people first and foremost,” Binay said.

“In my 30 years in public service, I have always been on the side of the poor. I will always value the dignity of women, children and the marginalized. I continue to fight for human rights and will always uphold the value of life,” he added.

Binay made the statement amid a six-point drop in his rating in the latest Social Weather Stations survey, placing him in fourth place behind the new survey front-runner Duterte. JE