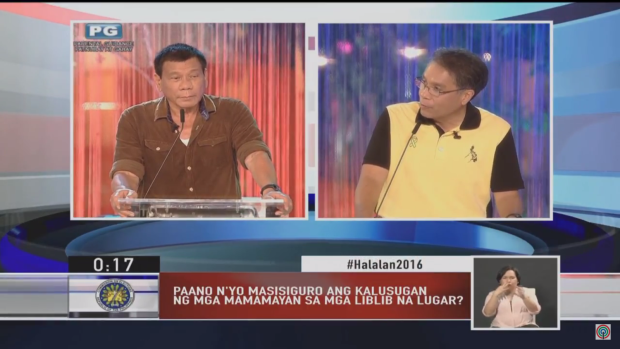 DAGUPAN CITY, Philippines — Malacañang on Monday dismissed allegations that administration bet Mar Roxas had received “advanced information” that helped him during the final presidential debate held in this city the night before.

Presidential spokesperson Edwin Lacierda told the media that all candidates were briefed about the debate topics beforehand.

“The topics were given to all the candidates ahead of time to prepare,” he said in a text message.

“Ang problema kay Digong (Duterte) at ang team nya, mahilig sa soundbite at tamad mag research, hindi nya alam na sarili nyang Davao City, nakikinabanang sa Philhealth.” (The problem with Digong and his team is that they prefer soundbites and are lazy when it comes to research. He does not know that in Davao City people are benefitting from Philhealth.)

Lacierrda said that Roxas was more knowledgeable than Duterte and Vice President Jejomar Binay, whom he said were experienced only on local governance.

“So sa mga undecided po na mga voters (So for the undecided voters), the third debate presented an opportunity to see who among the presidentiables will be able to lead our country forward  … and without corruption,” Lacierda said.

Some analysts said Roxas and Senator Grace Poe performed well during the debate held at the Phinma University of  Pangasinan on Sunday evening. However, they added it did little to erode the support that Duterte had been receiving.

Duterte continues to enjoy high preference ratings despite his controversial comment on the rape-slay of Australian missionary Jacqueline Hamill.