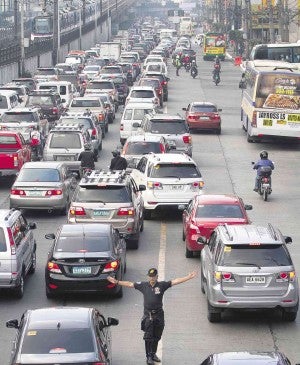 “No-Contact Apprehension” policy head Ronnie Rivera told members of the media on Wednesday that most of the violators were not following the loading and unloading areas and occupying pedestrian lanes and yellow boxes.

“These are buses, jeepneys, and other public utility vehicles which are getting and unloading passengers in areas not designated by the agency,” he added, noting that most of these violations happened along Edsa during the morning and afternoon rush hours.

Rivera also said that taxis were usually caught not respecting pedestrian lanes and obstructing yellow boxes found on intersections. Aside from these violations, he said that they also took note of speeding vehicles, such as those beating the red light and swerving, making illegal turns and defying the closed-door policy for buses.

Despite the increasing number of violators, the agency said they have not sent summons to motorists who were tagged for not following traffic rules. “We are still in the process of reviewing the violations but we are scheduled to send out notices this week,” Rivera said.

He explained that the review process would be the hardest task for his 15-man team, adding that they have been instructed to be careful in checking and verifying the violations before giving notices.

As for  sending summonses, Rivera said they would have these delivered through PhilPost for private vehicles while about 20 members of the agency’s motorcycle team would personally send the notices to bus companies.

Last Friday, the MMDA started its no-contact policy, which involves using around 650 closed circuit television (CCTV) cameras, of which 250 were recently installed, to monitor and apprehend traffic violations along Metro streets.

Most of the cameras were placed in strategic positions across the capital, especially on Edsa, C5 Road, Roxas Boulevard, Commonwealth Avenue and Macapagal Avenue.

If a motorist is caught on camera violating a traffic rule, the MMDA will send a notice to the vehicle owner using the address from its registration with the Land Transportation Office (LT). The notice will contain the details of the violation like the date, time, location and screenshot of the vehicle. Violators will not be immediately asked to pay for their violations to give them the chance to exercise their right to contest the apprehension with the MMDA’s Traffic Adjudication Division within seven days upon receipt of the notice.

The agency earlier explained that this new policy would not remove traffic constables along the streets as the no-contact system has been designed to support them in monitoring traffic violations.  SFM