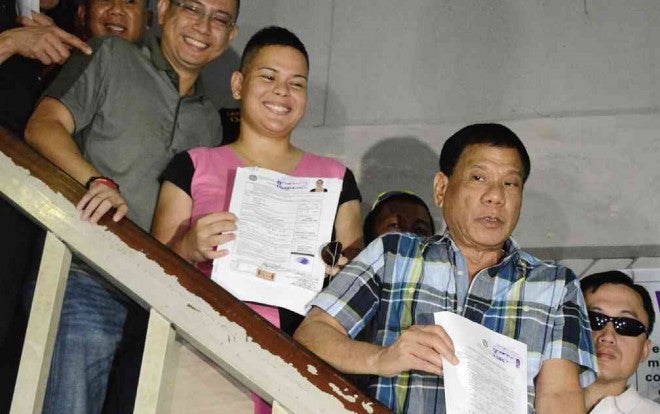 ILOILO CITY—He does not believe his daughter Sara had been raped as she earlier claimed, presidential aspirant and Davao City Mayor Rodrigo Duterte said, describing her in jest as a “drama queen.”

“She can’t be raped; she carries a gun,” Duterte told reporters in an ambush interview at the University of the Philippines Visayas where he spoke at a forum on Tuesday.

He had no previous knowledge of his daughter’s claim, the mayor said, adding that he did not want to comment further as it was a personal matter with her.

During his speech, however, Duterte again expressed doubt about his daughter’s statement, and jokingly called her “a drama queen.”

Sara “Inday” Duterte on Tuesday said she was a rape victim herself, but that she was not offended by her father’s remarks on rape. In fact, she will still vote for her father, she said.

“I am asked by people to comment on the rape joke of Digong. I am just saying I went through it and I do not feel offended by the rape joke,” said Duterte’s daughter by his first wife, Elizabeth.

But she’d rather not talk about her experience, the former Davao City mayor said. “It’s embarrassing,” she added.

Sara Duterte’s statement came days after her father was roundly criticized for joking about Jacqueline Hamill, who was held hostage, raped and killed during a prison riot here in 1989.

At a campaign rally in Quezon City on April 12, Duterte said he was angry about the rape, but also about the fact that the prisoners had taken turns assaulting Hamill, who was “so beautiful, the mayor should have been first.”  With a report by Nico Alconaba, Inquirer Mindanao