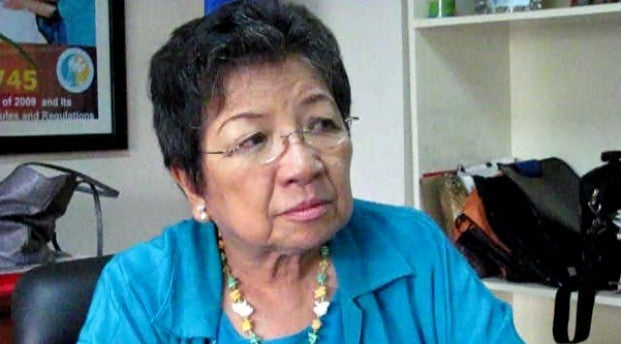 THE ISSUE is his attitude toward women, former Commission on Human Rights (CHR) Chair Etta Rosales said of the presidential candidate, Davao City Mayor Rodrigo Duterte, who has been under fire for treating as a joke the 1989 rape and killing of an Australian lay missionary.

“The issue here is his attitude toward the female gender,” Rosales said. “He says that’s gutter language. (But) he’s making excuses for his true character, (he) looks down on women. That is unacceptable for a presidential bet.”

Rosales said Duterte saw women as a commodity to exploit, and that he was “caught with his pants down” in the viral YouTube video that showed his rape joke.

“He expects the poor people to sympathize with him because they too come from the gutter. Mr. Duterte, this is plain hogwash, straight from the gutter,” said Rosales, who had revealed in previous interviews that she was tortured and sexually assaulted while detained during martial law.

Under the Magna Carta of Women, the CHR acts as the Gender and Development Ombud, tasked with developing indicators and guidelines for government agencies so they can promote the human rights of women, including their right to nondiscrimination.

The CHR also runs a Women’s Rights Program Center, a special unit that investigates human rights violations against women, and provides them legal assistance in cases involving discrimination, nonrecognition, violence, peace and order, employment, health and education, among others.

The Department of Social Welfare and Development (DSWD) also weighed in on the firestorm caused by Duterte’s rape joke and described rape jokes as “an insult to survivors and their families.”

“If we cannot be instruments toward their healing, the least we can do as citizens is to be cautious of our words and actions,” the DSWD said in a statement on Tuesday.

“Rape is a serious and traumatic experience … As a violation of human rights, it is unacceptable,” said the DSWD, one of the government agencies responsible for the rehabilitation and empowerment of rape victims and survivors.

“No one regardless of age, sex, physical appearance, social status, race, sexual orientation or even profession deserves to be raped … Let us work collectively for a society where every person is valued and human dignity is upheld,” it added.

Duterte had joked that the Australian missionary who had been raped during a prison riot in Davao City was so beautiful, he felt the mayor “should have been the first” among those who had raped her.

His comments, a video clip of which quickly went viral over the weekend, set off a storm of angry reactions from women’s groups, politicians, bishops, and the Australian ambassador.