Editor’s note: In this series, INQUIRER.net looks back at four Philippine Daily Inquirer front page articles on the bloody hostage drama that resulted in the deaths of 21 people, including Australian missionary Jacqueline Hamill who was raped by the inmates.

Below is the original news article published by the Philippine Daily Inquirer on August 16, 1989 (Wednesday): 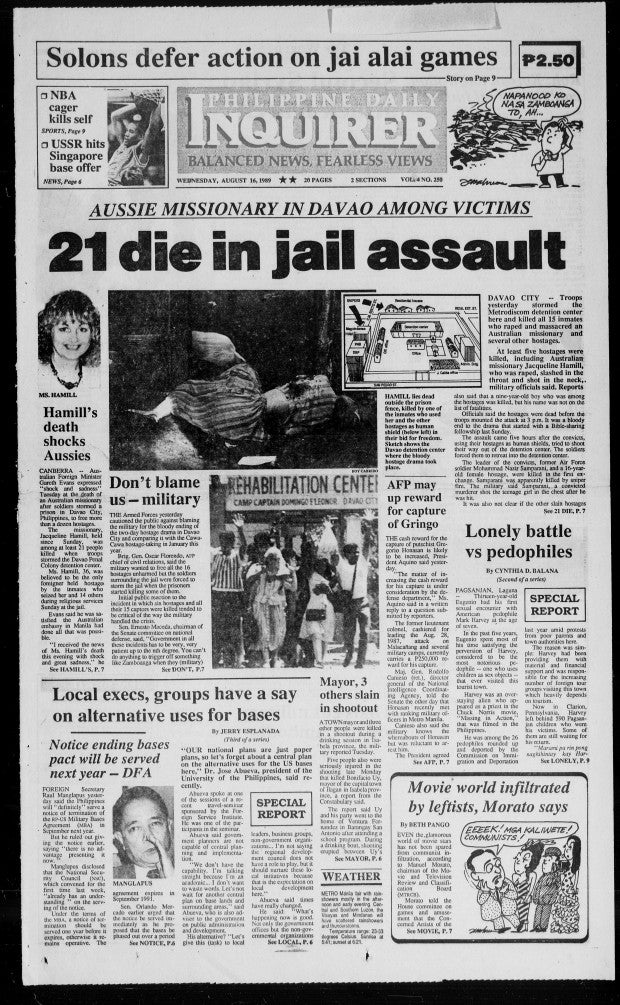 CANBERRA – Australian Foreign Minister Gareth Evans expressed “shock and sadness” Tuesday at the death of an Australian missionary after soldiers stormed a prison in Davao City, Philippines to free more than a dozen hostages.

The missionary, Jacqueline Hamill, held since Sunday, was among at least 21 people killed when troops stormed the Davao Penal Colony detention center.

Ms. Hamill, 36, was believed to be the only foreigner held hostage by the inmates who seized her and 14 others during religious services Sunday at the jail.

Evans said he was satisfied the Australian embassy in Manila had done all that was possible.

“I received the news of Ms. Hamill’s death this evening with shock and great sadness,” he said.

Ms. Hamill, from a family of 10 children, arrived in the Philippines four weeks ago as a member of the Joyful Assemblies of God, a charismatic Protestant group that conducted a prison ministry.

Earlier, her family was hoping she would be safe.

“I know Jackie’s in God’s hands and that God is looking after her,” said Denise Hamill, 34, a sister.

“If anybody was to be shot, Jackie would stand up first anyway,” Denise said. “She would rather be shot than allow someone else to be, if it came to that. She has no fear because she knows she would be going to God.”

Charismatic Christianity is widely practiced in south of the Philippines where the Church has been active in the fight against communist guerrillas, the Sydney Morning Herald newspaper said.

Hamill’s family, who lives in Australia’s southernmost state of Tasmania was optimistic she would survive.

“I was shocked, but I didn’t get upset or anything. I remained quite calm,” said Denise. “We just keeping praying and we know something good will happen. Knowing Jackie, she will be fine. She had no fear whatsoever.”

According to military reports, a group of prisoners overpowered their guards and seized their weapons during the religious class, taking 15 people hostage, including Hamill, the only foreigner.

The inmates threatened to kill the Australian missionary unless authorities gave them a getaway vehicle by yesterday afternoon, a negotiator said.

Shooting erupted in the jail yesterday afternoon and witnesses said two people may have been killed. Associated Press