Editor’s note: In this series, INQUIRER.net looks back at four Philippine Daily Inquirer front page articles on the bloody hostage drama, which resulted in the deaths of 21 people, including Australian missionary Jacqueline Hamill, who was raped by the inmates.

Below is the original news article published by the Philippine Daily Inquirer on August 17, 1989 (Thursday): 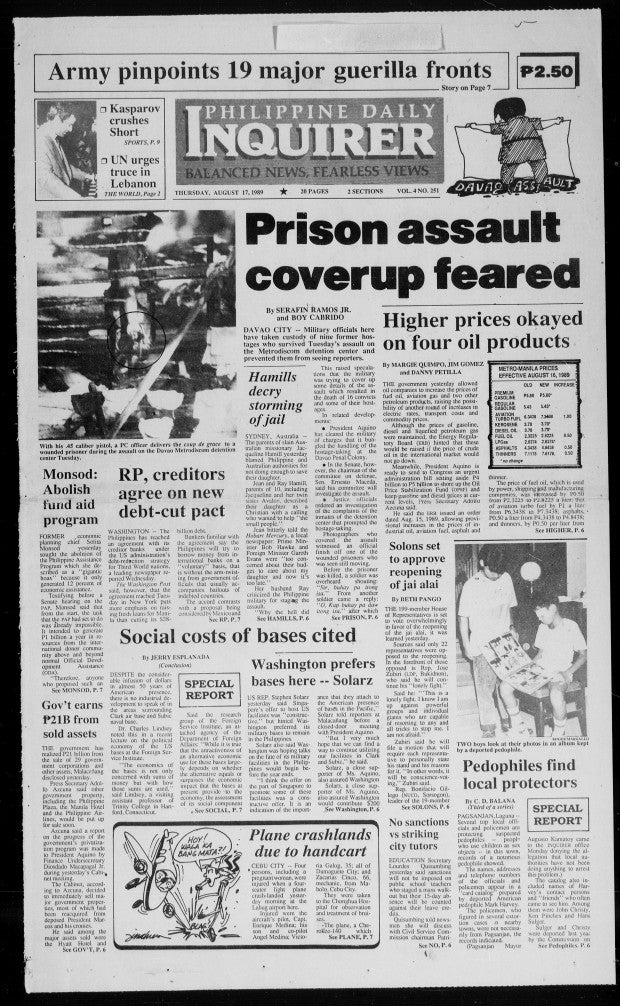 DAVAO CITY — Military officials here have taken custody of nine former hostages who survived Tuesday’s assault on the Metrodiscom detention center and prevented them from seeing the reporters.

This raised speculations that the military was trying to cover up some details of the assault which resulted in the death of 16 convicts and some of their hostages.

— President (Corazon) Aquino has cleared the military of charges that it bungled the handling of the hostage-taking at the Davao Penal Colony.

— In the Senate, however, the chairman of the committee on defense, Sen. Ernesto Maceda, said his committee will investigate the assault.

— Justice officials ordered an investigation of the complaints of the inmates of the detention center that prompted the hostage-taking.

Photographers who covered the assault witnessed an official finish off one of the wounded prisoners who was seen still moving.

Before the prisoner was killed, a soldier was overheard shouting, “Sir, buhay pa itong isa.” From another soldier came a reply: “O Kap, buhay pa daw itong isa.” After which, the official referred to as “Kap” approached the prisoner, drew an Ingram pistol and fired. The gun jammed, however.

After the official’s second attempt at the Ingram, he returned the pistol to his bag drew a .45 caliber pistol and delivered the coup de grace by shooting the prisoner in the head.

After the assault, Brig. Gen. Mariano Baccay, Southern Mindanao regional commander, ordered the soldiers to prevent the photographers from entering the Metrodiscom jail.

Baccay also blocked off attempts by reporters to interview the survivors of the hostage-taking, saying they were still suffering from shock.

“What else could people ask of us?” asked Col. Franco Calida, Davao Metrodiscom chef. “We rescued all the remaining hostages after the others were killed by the prisoners. If they (prisoners) had lost their minds and begun killing people, why should we blamed for it?”

At Malacañang, the President cleared the military of charges it bungled the handling of the bloody hostage-taking.

Ms. Aquino earlier expressed “sadness” over the death of the five hostages, including Australian missionary Jacqueline Hamill, and ordered and inquiry into whether there were steps taken to save their lives.

“It was really very difficult to handle. It would appear that the handling was dictated by the situation on the ground and there appears to be no indication of mishandling the situation although we are examining whether or not they (military) reported what really happened,” whether or not the casualties could have been avoided and what can be done to avoid similar situations in the future,” said Azcuna.

At the Senate, the committee on national defense and security is set to conduct an inquiry into the assault.

Maceda said the Davao assault was reminiscent of the storming of Camp Cawa-cawa in Zamboanga City last January which resulted in the loss of many lives.

“I really wonder if the AFP leadership implemented any reforms as a result of the hard lessons of Zamboanga City incident. Did they conduct the promised training for military commanders on how to handle hostage situations?” Maceda asked.

“I am appalled at our continued propensity to shoot and to kill. That is why people now say ‘everything is going up under this administration except the price of lives.’ Murang-mura ang buhay ng tao,” he added.

Sen. Jose Lina urged a “just and compassionate” treatment of prisoners to strengthen the prison system.

In a privilege speech yesterday, Lina said the tragic incident occurred at a time when the Board of Pardons and Parole under the Justice Secretary Sedfrey Ordoñez was deliberating on the cases of the 16 Davao convicts for executive clemency.

“The Davao hostage incident is only the tip of the iceberg. We need to improve and provide the resources and infrastructures for prison and pardons and parole systems,” Lina said. “We only need to go to see our city jails in Metro Manila and national penitentiary to see why we must do something for our neglected sector of society.”

At the House of Representatives, Minority Floor Leader Rodolfo Albano, Assistant Minority Leader Salvador H. Escudero III and, Rep. Ali Dimaporo deplored that what the soldiers did was like “burning the barn to kill the rat, forgetting that their real objective was to either free or save the lives of the hostages, including those of the terrorists.”

At the justice department, Justice Undersecretary Bello told a press briefing they have ordered an investigation of the complaints of the 15 prisoners before the hostage-taking incident.

Bello said the prisoners had alleged that they wanted to escape because they were abused and treated oppressively by prison officials. Many of the prisoners were among those who staged an escape try last April.

Bello was one of the government negotiators in the hostage drama which begun last Sunday. He said he will press for “full-dress probe” of the physical conditions in the colony, the attitude of prison officials toward the inmates, and the security measures provided when they allowed lay missionaries to teach inside the prison cell.

Bello said the prisoners had complained that some prison officials chopped the ears of three of their companions. He added that they earlier asked to be transferred to the National Penitentiary in Muntinlupa.

Bello also defended the decision of the military authorities to storm the prison detention center.

“The negotiations were doomed from the start because the prisoners were determined not to be caught alive,” Bello said.

It was the second time in eight months that a hostage incident inside a military camp ended in bloodbath.