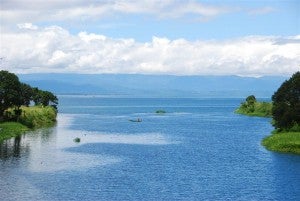 The Department of Environment and Natural Resources in the Autonomous Region in Muslim Mindanao (DENR-ARMM) said the water level in Lake Lanao has declined to 698 meters above sea level (MASL), close to the critical level of 690 MASL.

Last week, outgoing Lanao Sur Governor Mamintal Adiong and his brothers called on the national government to help review and improve lake management in the face of climate change.

DENR-ARMM Secretary Kahal Kedtag said surrounding forest trees would suck the lake water in a long absence of rainfall during a dry-spell.

Local officials and residents have said the state of biological deterioration has also been caused by increasing level of pollution and the lake’s man-made hydrological alteration in dams, resulting in a diminishing water runoff.

Governor Adiong said initially, the lake water dropped to 699.24 MASL, and has been decreasing from the normal water level of 701.10 MASL.

The National Power Corporation (NPC) sees the drop in the lake water level as contributing to the Mindanao power woes. In a press statement, the Mindanao Power Monitoring Committee (MPMC) said the lake water level has been 699.26 MASL in the past few months, while the minimum operating levels should be at 699.15 MASL. Currently, key Central Mindanao cities, at least, would have to bear with 3-4 hours of daily brownouts.

Due to declining water levels in hydro-power dams and water bodies tapped by these dams, the National Grid Power Corporation of the Philippines (NGCP) noted that Mindanao has been operating with a power deficiency of 248 MW. Distribution utilities and rlectric Cooperatives would have to undertake necessary measures like, “voluntary load curtailment, activation of the Interruptible Load Program (ILP) and tapping of embedded modular generator sets,” the statement said

A study published by the Southeast Asian Fisheries Development Council (SEAFDC) said the other possible effects of lake water level fluctuation would be the following:
*  Planting rice in lowland areas in the municipalities of Ramain, Ditsaan, Tamparan, Mulondo, Masiu, and Taraka would no longer be feasible;
*  Rain-fed areas are no longer suited to rice farming from January to May. Farmers would have to shift to corn during that cropping season, and plant rice in June to November; and,
*  Ramain, Taraka, Gata and Masiu Rivers may no longer be navigable due to the shallow waters, which may increase the cost of transporting people and goods.

Pollution is generally blamed on poor waste management and disposal that in many cases, domestic wastes, and even sewer end up in lakeshore drainage.

But all is not lost yet in saving Lake Lanao, the main source of livelihood activities to lakeshore communities.  Sustaining small-scale fish culture may hold the key to keeping it viable.

Assemblyman Adiong said “the absence of clear, appropriate and community-supported institutional mechanism has contributed further to the unabated deterioration of Lake Lanao. The existing legal framework for Lake Lanao has been proven ineffective and calls for a better one.”

Their brother, Rep. Ansarudin Adiong cited three options by which the government can work with the problem:
*  Devolve national powers and functions over Lake Lanao to the proposed Bangsamoro Government;
*  Place its supervision and control under shared power of the regional autonomous government; and,
*  By congressional act create a Lake Lanao Management and Development Authority with autonomous administrative and operational powers to restore the lake’s indigenous fish habitats and diversity of species.

Lake Lanao is considered the largest source of hydropower generation in Mindanao.  SFM