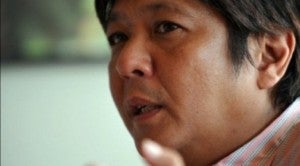 In a statement, Marcos said that it would be vital for elected government officials to serve the people credibly by erasing all doubts on their character, particularly on the contents of their bank accounts.

Marcos said, “In the spirit of transparency for elected officials, there’s no problem because it would be easier for us in elective positions to do our jobs if people do not have doubts as to our bank accounts.  Lift the bank secrecy law, I’m all for it.”

He pointed out that relevant details of his bank accounts have been recorded in his statement of assets, liabilities and net worth or SALN.

The vice presidential candidate said that all candidates running in the election should be asked to waive their rights under the bank secrecy law for the sake of transparency.

Marcos cited Bangko Sentral ng Pilipinas (BSP) governor Amando Tetangco Jr’s call to ease bank secrecy restrictions due to the US$81 million stolen from the Bangladesh government that ended up in the Philippine banking system.

The BSP governor had proposed for bank secrecy laws to be conditionally eased to enable the government to examine deposits and act on suspicious transfers.

Marcos said that while he agreed with Tetangco, the exemption from the bank secrecy law should not be applied on everyone particularly on businessmen.

“If you lift the bank secrecy law, no business will enter the country because of course they don’t want the government to have access to their bank accounts,” the vice presidential candidate said.  SFM