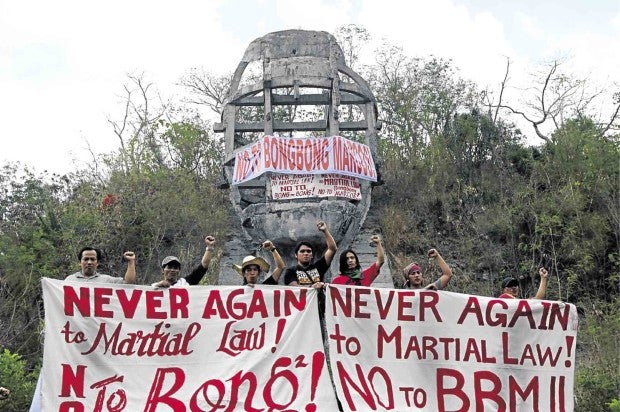 EXORCISING MARCOS GHOST Victims of human rights violations during martial law hold a rally on Friday before a giant bust of ousted dictator Ferdinand Marcos in Tuba, Benguet province, to remind voters of the evils of martial law. The group has vowed to oppose the candidacy of Sen. “Bongbong” Marcos. RICHARD BALONGLONG/INQUIRER NORTHERN LUZON

BAGUIO CITY, Philippines—True to their vow “to hound Bongbong until election day,”  human rights victims during martial law staged a rally on Friday at the oversized Marcos bust along Marcos Highway in Tuba town, Benguet province.

The bust, which was cannibalized after being blown up by communist rebels in 2002, was a testimony to the excesses of the Marcos family during martial rule, said Joanna Cariño, a member of the Campaign Against the Return of the Marcoses to Malacañang (Carmma).

Vice presidential candidate Sen. Ferdinand “Bongbong” Marcos Jr. was in Baguio on Friday for a series of meetings, prior to a talk he and presidential aspirant Sen. Miriam Defensor-Santiago were to deliver today at the Saint Louis University here.

In February, Carmma began its campaign to thwart the possible return of a Marcos heir to Malacañang.  Cariño acknowledged that the campaign “may have been a little late in the game,” but added that victims of atrocities during the 20-year rule of strongman Ferdinand Marcos “would hound Bongbong until election day.”

Carmma and members of the Samahan ng mga Ex-Detainee Laban sa Detensyon at Aresto (Selda) assembled at the base of what used to be a 98-foot concrete bust of Marcos.

The bust was built by the Philippine Tourism Authority (PTA) to resemble the sculpted faces of four American presidents at Mt. Rushmore. The bust loomed over Marcos Highway in areas that were being developed into  Marcos Park.

On the eve of Rizal Day in 2002, the bust was blasted by communist rebels. Ibaloy families in the area were reclaiming sections of Marcos Park from the PTA at the time.

Members of Ibaloy families attended the Carmma-Selda rally against the Marcoses on Friday.

Cariño said the activity was intended to demystify “historical inaccuracies being peddled online by Marcos supporters that young people now take as facts about the Marcos regime.”

“Thirty years [since the Marcos ouster in the 1986 People Power revolt] is too short a time for Filipinos to forget Marcos’ martial rule,”  she said.