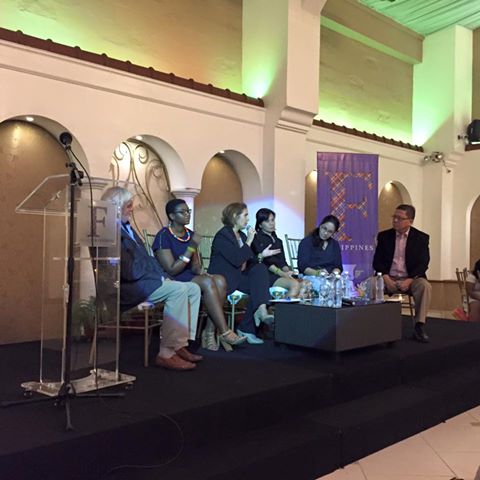 Acknowledgment, accountability and youth involvement are the main factors that would help countries like the Philippines heal and move on from a dictatorship or martial law, international experts said during a forum in Quezon City.

The forum, organized by FNF Philippines, aims to “to create noise” about the atrocities of martial law. Coinciding with the election year, which features the vice presidential run of Senator Bongbong Marcos, son of the late dictator Ferdinand Marcos, the event is supposed to help “unveil the illusion that the Philippines thrived under a dictatorship,” organizers said.

Resource persons from different continents, in a segment moderated by INQUIRER.net Editor in Chief John Nery, shared their nation’s experiences in healing from the wounds of a dictatorship during the forum “Unmuting the Silence on Martial Law” held in Plaza Ibarra, Quezon City on Thursday.

Arno Keller, a German consultant on political leadership and civil society development, said it is important for the youth to learn about the past.

He said that a couple of decades after the fall of Adolf Hitler and the Nazi Party, the younger generations started asking about their parents’ involvement in the dictatorship.

Keller said if the youth doesn’t ask questions about the past, “then we always have a fear that dictatorship will come again.”

For Argentina and South Africa, on the other hand, commissions that helped acknowledge and hold perpetrators accountable were pivotal in the transition towards a democratic society.

Carolina Gonzalez Rodriguez, a professor at the University of Buenos Aires School of Law, said a “major step” was the creation of a national commission to investigate the cases of the “disappeared” or those abducted during the military regime of the 1980s.

“It was formed by very prominent citizens. Not related to any political party. Citizens respected by the citizenry,” she said.

Rodriguez emphasized that it was also important that those accused of committing crimes were given fair trial.

South Africa had a similar mechanism through a Truth and Reconciliation Commission.

Roshuma Thungo, deputy head of research at the Institute of Race Relations, said the commission allowed both victims and perpetrators to come forward. Families of victims got recognition or public acknowledgement for what had happened and perpetrators were given amnesty.

“What that did for the family (is that) it gave them a platform to talk about the pain and the trauma,” she said, explaining that before that, those involved denied having anything to do with the abductions.

As for Thailand, which has been under several military regimes and coups d’etat, the fear persists and the struggle continues.

“Every time we have a political conflict, the military has a chance to come in and say, ‘We will manage this,’” she said.

“The climate of fear is all around…The fear continues,” she added.

As for the Philippines, writer Susan Quimpo said the country has “done very little to deal with the past.”

She enumerated several efforts, including a reparation law, the Bantayog ng mga Bayani and the other memorials. However, she said textbooks failed to mention the negative effects of martial law.

Martial law was declared by former President Marcos in 1972 and lasted until 1981. There were many reports of torture, killings and other human rights violation.

Quimpo said “truth and memory” are tasks of journalists and the government.

“To tell the truth and not to let the future generations forget,” said Quimpo, author of “Subversive Lives: A Family Memoir of the Martial Law Years.”

She said that her work has led her to discussing martial law in schools.

Chito Gascon, Commission on Human Rights chairperson, said in his keynote speech that the Filipino people are now “confronted with the important task of making a decision about how we move forward.”

He said there is now a counter-narrative that attempts to “justify authoritarianism as being okay.”

“And I think those of us who came from the generation who struggled as well as you…must all come out for freedom, for democracy, for human right,” he said.

He said the fight for freedom, democracy and human rights still continues.

“They say the price of freedom is eternal vigilance. Vigilant in a way that we are knowledgeable about what happened in the past,” Gascon said.

He said there should be a clear accounting of what happened during the martial law so that those guilty should be held accountable.

“So that we can, together with the characters on the wall,” Gascon said, pointing to drawings on the wall with anti-dictatorship slogans, “say ‘Never again.’”