As India reels from drought, gov’t slammed for poor policies 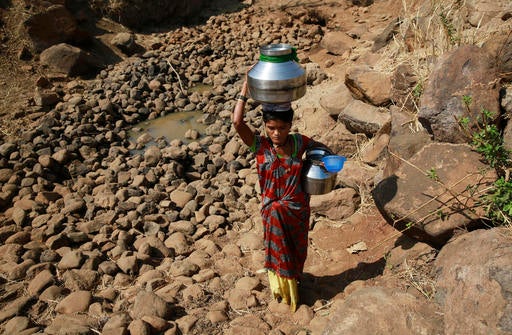 In this April 12, 2016 photo, a woman carries water from a spring at Raichi Wadi village, 120 kilometers (75 miles) north-east of Mumbai, India. Decades of groundwater abuse, populist water policies and poor monsoons have turned vast swaths of central and western India into a dust bowl, driving distressed farmers to suicide or menial day labor in the cities. AP

SHAHAPUR, India — Shantabai Babulkar’s day begins before dawn with a 5 kilometer (3 mile) trek across barren fields and dusty scrubland to fetch water from a distant well for her family.

The two metal pots of muddy water that Babulkar, 58, balances on her head and a third that she carries in the crook of her arm are the only source of water for her and the five members of her family for their day’s needs of drinking, cooking and washing.

Shahapur, Babulkar’s village, in the western Indian Maharashtra state’s Thane district, is in the grips of one of the worst droughts in decades. Parched fields, burnt crops and wasted cattle have seen a spike in suicides by distressed farmers unable to repay their loans. Tens of thousands of others have left their farms and along with their families moved in search of jobs to join the ranks of the unemployed poor in the cities.

The vast Indian hinterland has long faced water shortages, especially in the torrid months from April to June, before the monsoon rains bring some relief. The showers, which normally run from June to September, are crucial in a country where 60 percent of the population works in agriculture and less than half the farmland is irrigated. But decades of abuse of groundwater resources, flawed water policies and successive poor monsoons have turned large parts of central India into an arid dust bowl.

Hundreds of millions of people in at least 13 states are reeling from severe drought, a situation that is expected to worsen in the coming months. Last month, a thermal power station in West Bengal had to shut for 10 days because it ran out of water to cool the coal-fired plant’s heating pipes.

But nowhere is the situation as extreme as in Maharashtra.

On Wednesday, a court in Mumbai ordered 13 Indian Premier League cricket matches due to be played in Maharashtra next month relocated because maintaining the cricket grounds requires millions of gallons of water.

Darryl D’Monte, an environment activist, says the water crisis in Maharashtra has been aggravated by the shift from growing crops of millet, sorghum and other cereals that need much less water to sugarcane, which is a water guzzler.

D’Monte blamed the nexus between big sugarcane interests and politicians and urged a shift back to crops more suited to the region’s dry climate.

“It’s time we took a longer view and stop the wastage of water with sugarcane,” he said.

Crop failures force poor farmers to borrow money at high interest rates for all their needs — from buying seeds and fertilizers to food for themselves and cattle. They often mortgage their lands and as borrowings mount, many farmers are driven to suicide.

The government told lawmakers that 3,228 farmers in Maharashtra committed suicide in 2015. In the first three months of this year, 273 farmers took their lives in the worst affected Marathwada region of Maharashtra.

Environmental activists say the reckless extraction of groundwater had led to a precipitous drop in water tables not just in Maharashtra, but across India.

Rajendra Singh, a water conservationist, describes the water shortage as a man-made drought and blames the government for its indifference to the poor, who suffer the most.

“Climate change and rising temperatures are a reality. Yet the government does not have a strategy to deal with the permanent water shortages that we’ve been seeing for a decade,” Singh said.

With more than half of India’s 688 districts suffering from severe drought, the government had to put in place a long-term strategy to revive and recharge aquifers and help restore groundwater tables, he said.

India’s meteorological department this week announced that monsoon rains could be above average this year as El Nino — a warming of the eastern Pacific Ocean that leads to dry spells in South Asia — was receding.

“This could be the government’s chance to begin work on water security,” Singh said.

Meanwhile, criticism is mounting of Prime Minister Narendra Modi’s central government for its poor handling of the crisis. India’s top court recently reprimanded the government for its apathy in dealing with what it called a “national calamity” affecting millions of the poor.

Social activists have also criticized the government’s tardiness in releasing funds for a public welfare scheme that assured 100 days of work for the unemployed. State governments complain that a large chunk of funds from this year’s budget would be used to clear last year’s pending wage bills, resulting in even less to spend at a time when the drought is leaving even more farm laborers jobless.

As temperatures across the subcontinent soared to unprecedented levels, touching nearly 43 degree Celsius (110 Fahrenheit), small lakes and streams have dried up.

The situation was so dire in some parts of Maharashtra that this week that the government sent a “water train” of tankers carrying half a million liters (132,000 gallons) to the worst-hit Latur district. The train, traveling a distance of 350 kilometers (220 miles), was stopped along the way by angry villagers wanting a share of the water. Finally, police had to escort it to its destination.

The extreme water shortages have led to fights among neighbors.

Farmer Devaki Bai Gadkari said she leaves her home before dawn to avoid meeting the owner of the well from where she draws water.

“If they see me carrying three pots of water, they get angry,” Gadkari said, as she trudged home to her three small children in the village of Kukse Borivali, about 65 kilometers (40 miles) northwest of Mumbai.

In cities and towns across India, water shortages have led to the formation of private water companies that control water that is supplied by tankers often at exorbitant rates.

As water bodies run dry, farmers were selling their cattle and moving to nearby cities in search of daily wage work.

Vyankatesh Manjulkar said he was forced to sell his cows and bulls as there was no water for the thirsty animals.

“We can’t get water anywhere. The villagers had to walk more than 5 kilometers to get one pot of drinking water,” said the cattle herder as he prepared to climb a truck taking construction workers to Mumbai.

Even as millions go thirsty, activist Palagummi Sainath, who has spent much of the past three decades writing about rural poverty, points to real estate companies enticing property buyers with high-rise buildings in Mumbai that boast a swimming pool on every floor. Urban areas in Maharashtra get 400 percent more drinking water than rural areas, he said.

“People have to decide if availability of drinking water is a human right,” Sainath said.