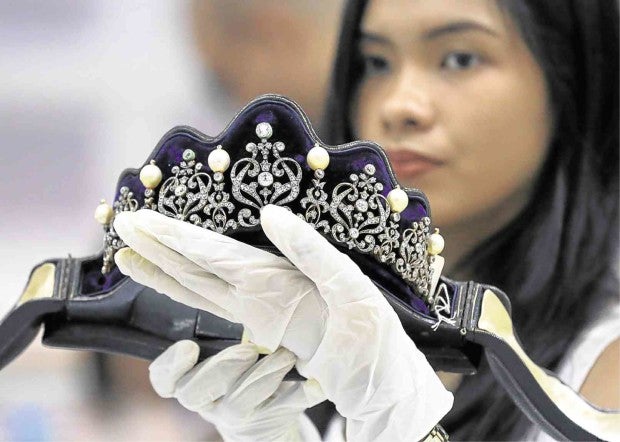 A PIECE of jewelry seized from the collection of former first lady Imelda Marcos, believed to have been acquired illegally, was presented recently by the Presidential Commission on Good Government. MARIANNE BERMUDEZ

ILOILO CITY, Philippines—Pictures painted more than a thousand words in an exhibit here on the abuses and excesses committed during the more than 20-year reign of the late dictator Ferdinand Marcos.

“I was shocked and horrified upon reading the accounts of torture and killings,” said the student, who requested to remain anonymous to be able to talk freely.

“I knew about martial law but only in a general sense,” said the 21-year-old student. “I will be very afraid if this happens again.”

What the student saw were mostly photographs and blown-up posters featuring horrific accounts of how martial law, touted by the late dictator as an anti-communist move, turned into the country’s darkest era.

Accounts of beatings, rapes and forms of torture like running electricity through a detainee’s genitals, mutilating hands and keeping detainees in solitary confinement filled the exhibit.

The exhibit was brought by the Presidential Commission on Good Government (PCGG) to this city, at the lobby of the Graduate and Continuing Education Building on the UPV campus, and ran from April 11 to 15.

The traveling exhibit would be brought to other UP campuses and other schools, said PCGG Commissioner Vicente Gengos Jr.

The PCGG was created by President Corazon Aquino in 1986 to recover the ill-gotten wealth of the Marcos family, their relatives and cronies.

Gengos said the exhibit was part of efforts to revisit history, especially the martial law regime of Marcos, and highlight the lessons of that period.

Gengos said attempts to distort history should be opposed, citing recent references to the years 1972 to 1986 as a golden age under the Marcos dictatorship.

The exhibit includes photographs of rare and expensive pieces of jewelry recovered from the Marcoses when they were forced into exile in Hawaii and from their cohorts who tried to smuggle these out of the country.

The most horrific accounts were those of the torture of innocent people, like Hilda Narciso, a church worker who was arrested, held in a small cell, fed soup with worms and rotten fish and repeatedly raped.

Archimedes Trajano, 21, asked during an open forum why Imee Marcos, daughter of the late dictator, was the national chair of the youth organization called Kabataang Barangay. Imee’s bodyguards took Trajano, tortured him and threw him out of a building window, killing him.

There are also photographs of masterpieces acquired by the Marcoses, the most expensive of which was “Madonna and Child” by Michelangelo worth P161,822,500.

At least 196 artworks are still missing as of April 2015, according to  the PCGG.

Gengos said the Marcos family and their cronies had been fighting the government’s efforts to recover their ill-gotten wealth.

“We have to learn from our history and we should not flirt with another  strongman rule. We should also ensure that the money of the people is  not made the kitty of a few,” Gengos said.