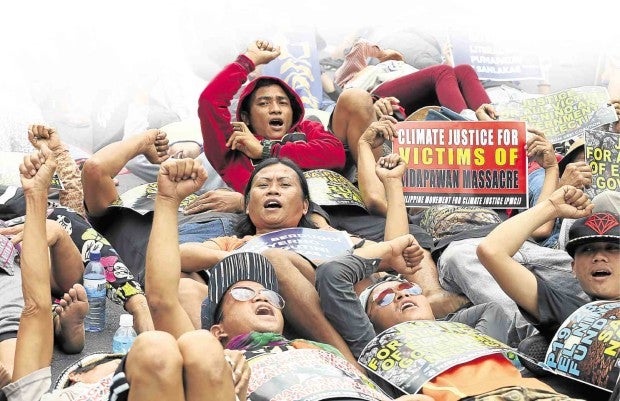 MEMBERS of militant groups hold a die-in protest on Mendiola Bridge in Manila to express support for hundreds of farmers demanding food aid who were dispersed violently in Kidapawan City. At least two farmers were killed and dozens were wounded during the operation to clear the road of farmers. MARIANNE BERMUDEZ

COTABATO CITY, Philippines—A ranking official of the Autonomous Region in Muslim  Mindanao (ARMM) has expressed disgust over the apparent inaction of Agriculture Secretary Proceso Alcala on the regional government’s request for funds to alleviate the plight of some 34,000 drought-stricken farmers in the region.

Funds were also the appeal of a senatorial candidate to Malacañang.

In a statement, Senate President Pro Tempore Ralph Recto asked Palace officials to release immediately  to the provinces billions of pesos in calamity and so-called Quick Response Funds (QRF) to avert a national crisis caused by the widespread drought.

“The dry spell is real,” said Recto. “Now is the time to release the funds. Tomorrow may be too late.” Recto said Congress had appropriated the funds and there was no reason for the Executive to hold on to them.

Laisa Alamia, ARMM executive secretary and head of the regional Humanitarian Emergency Action Response Team, confirmed on Friday that no fund for areas hit by El Niño had been released by the national government.

“Since last year until now, our letter request for funding has not been acted upon despite follow-ups,” she said.

Last week, North Cotabato Gov. Emmylou Taliño-Mendoza also said her province, which is also reeling from the effects of El Niño, had not received any funding from the national government, although she had requested it as early as March.

Mendoza and her province were thrown into the spotlight on April 1 when police opened fire at a barricade of drought-hit farmers demanding food aid in Kidapawan City, leading to a clash that killed two protesters and wounded dozens of others, including policemen.

Alamia said she was blaming Alcala for the non-release of the El Niño fund, which could have provided relief to 34,509 tillers affected by the drought that had damaged over 19,000 hectares of farms in Maguindanao, Lanao del Sur, Sulu, Basilan and Tawi-Tawi.

“We do not know what’s keeping Secretary Alcala from attending to the needs of drought-stricken farmers in the ARMM,”  said Baintan Adil-Ampatuan, ARMM Planning and Development Office chief.

“We do not need to wait for the provinces to declare a state of calamity in  their localities before downloading the funds,” said Recto in his statement.

“A national crisis is just around the corner,” said the senatorial candidate.

He said the dry spell, plus drought in funds, was a “perfect formula for more Kidapawans,” referring to the bloodshed in the city.

Recto said under the national budget, the government had P38.9 billion for disaster funds. But because P18.9 billion of the funds had been earmarked for Supertyphoon “Yolanda” reconstruction, only about P19 billion could be used for other calamities, like the El Niño, which is still very significant.

The disaster funds were different from the QRF, he said, adding that the Department of Agriculture  had P500 million in QRF at its disposal.

Read Next
Abuses, excesses of martial law depicted in exhibit
EDITORS' PICK
Beyond the Chocolate Hills: A farm-to-table, heritage culinary adventure of Bohol
MyCitiHomes premiers PH’s first 3-star certified BERDE District residential development
‘Crash Landing on You’ couple confirms pregnancy
Enrile contracts COVID-19: ‘To my critics and enemies, I am not going to die yet’
Metro Manila’s COVID-19 positivity rate jumps from 3.9% to 5.9% — OCTA
House energy committee chair Arroyo bats for cheap electricity
MOST READ
Duterte: It was correct for Bongbong Marcos to ‘decline’ presidential debates
Enrile contracts COVID and snipes at critics, foes: ‘I am not going to die yet’
Russia steps up missile strikes on Ukraine as G7 leaders gather
Dennis Padilla answers Leon Barretto’s open letter: ‘Been reaching out to you for 15 years’
Don't miss out on the latest news and information.