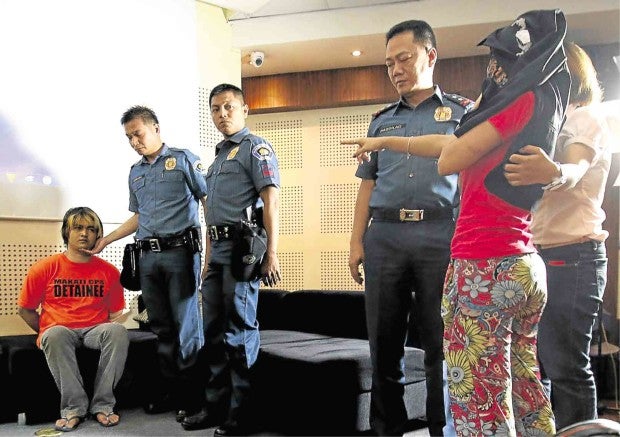 ‘That’s him’ A rape and robbery complainant points to Nitro Agustin Ison as her alleged attacker, during a press conference that presented the suspect in Camp Crame on Friday. The police are linking the 24-year-old to a spate of crimes in Makati, Mandaluyong, Taguig, Pasay and Quezon City. RICHARD A. REYES

The police are pinning all these on Nitro Agustin Ison, a stocky 24-year-old with blond-streaked hair, who allegedly used two other names and preyed on taxi drivers, call center employees and a popular musician’s widow.

But the Philippine National Police presented Ison to the media on Friday as the man behind a string of more recent crimes, including the Feb. 10, 2016, killing of Amparo “Teng” Santaromana Gamboa, wife of the late Tropical Depression frontman Dominic  “Papadom” Gamboa.

“He would board a taxi as a passenger, hijack the vehicle, then use it to pick up victims for robbery-holdup,’’ Pagdilao said. “Some (of the robberies) led to homicide, some to rape.”

A rape victim, who hid her face under a black jacket when called to the press conference, pointed to Ison as her attacker.

Ison is a resident of Barangay Addition Hills in Mandaluyong City—where the EPD earlier looked for Ramos—and also went by the name Zenki, the PNP said.

Allowed to speak to reporters, Ison insisted he “knew nothing” of the charges against him. “I surrendered because I want to clear my name.”

The Makati police, who spearheaded the operation that led to Ison’s arrest, are linking him to robbery cases in Makati, Taguig, Mandaluyong, Pasay and Quezon City.

This pattern appears to match the case of Gamboa, who was last seen alive around 2:20 a.m. of Feb. 10 when she took a cab from her call center in the Makati central business district. Shot near the chin, her body was found about 40 minutes later on a heap of trash on Kalayaan Avenue, Gaudalupe Nuevo, also in Makati.

In an interview on Friday, the Makati police chief, Senior Supt. Ernesto Barlam, said Ison’s link to the Gamboa case was established after he was identified by taxi driver Avelino Moran as the passenger who stole his cab on Feb. 8 as they passed through C-5 Extension, Merville, Pasay.

The “Jashkyle” taxi (UVY 402) was found abandoned on JP Rizal Street, Makati, on Feb. 10, the day Gamboa was killed. Blood found inside the vehicle was later found to be matching Gamboa’s, Barlam said. TVJ