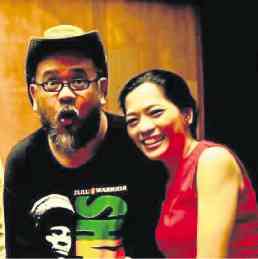 “We hope the media and the police can help us find the animals who did it.”

It was a cry for justice from the grieving family and friends of Amparo Santaromana-Gamboa, widow of the reggae artist known as Papadom. They remained in shock following the discovery of her body on a Makati City road in the wee hours of Wednesday, dumped on a heap of trash.

It took the police more than 24 hours to establish Gamboa’s identify since her personal belongings—including IDs—were missing when her body was found by a scavenger at the corner of Kalayaan Avenue and Barrio Bisaya in Guadalupe Nuevo around 3 a.m.

The police first brought the body to a funeral home in Pasay City and was only positively identified by her family Thursday night, said Senior Supt. Ernesto Barlam, the Makati police chief.

She probably put up a fight before she was shot near the chin, according to a family member.

“She was found face down among piles of garbage. Blood oozed from her head,” Senior Insp. Roman Salazar Jr., the deputy chief investigator, told the Inquirer on Friday. “A witness said she was brought there by a vehicle. We are checking if there are closed-circuit television cameras in the area.”

“We are still tracing her steps to determine what exactly happened,” Salazar said amid speculation that Gamboa was the latest to fall victim to robbery-holdup gangs prowling Makati in taxis.

Gamboa’s friend, Abba Pangilinan, said in a Facebook post Thursday morning that the victim was last seen alive at 2:20 a.m. Wednesday, when she left her office in the Makati central business district.

The 50-year-old victim was the wife of the late Dominic “Papadom” Gamboa, lead vocalist of the 1990s reggae band Tropical Depression, the seven-member act behind hits like “Kapayapaan,” “Bilog na Naman ang Buwan” and “Alaala.”

The band disbanded after Papadom’s death due to kidney failure in 2013, but it was later revived with a new frontman and Gamboa as manager.