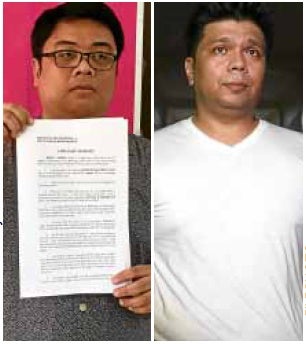 This must be tougher than all the three libel cases earlier thrown his way.

Former Iglesia ni Cristo minister Lowell Menorca II, who has shot to prominence after crying harassment from the INC leadership, is again being sued—this time by a church member accusing him of adultery.

Davis Chavez Flores, a 38-year-old Quezon City resident, accused Menorca and his wife Aedtnavye Juntilla Lazo, 34, of having an affair since 2008.

He filed the complaint on Friday in the Manila city prosecutor’s office, assisted by lawyer Kristoffer James Purisima.

In an interview, Flores said he already had suspicions about the affair just three months into his marriage with Lazo in May 2007, after he introduced her to Menorca. “You could say that Menorca and I are friends, since we share the same workplace. But we don’t necessarily have the same circle of friends.”

In the complaint, Flores said months after that introduction, deliveries of “expensive food such as baby-back ribs, sub-sandwiches and salads” started arriving at their house, all courtesy of an unknown sender.

His suspicion grew further when Lazo often came home with “gifts,” like a huge pink stuffed toy dog, and when Menorca started showing up to join him and his wife in their badminton games.

In the years that followed, Flores said, he caught Lazo and Menorca communicating frequently through text messages. He also found in their home—where, at Lazo’s request, they had been sleeping in separate bedrooms practically since the start of their marriage—toiletries from Manila Diamond Hotel, Bayview Park Hotel and Sogo Hotel.

At one point, Flores said, a neighbor bluntly told him: “May iba na ang asawa mo (Your wife is seeing another man)!” But he “refused to believe the rumors.”

Finally, in late 2015, he decided to search for his wife’s name on the Internet to see if she and Menorca had left any online trace of their affair.

A blog, he alleged, confirmed his fears:  downerofajsheart.blogspot.com carried photos of his wife and Menorca, but as trysting lovers named “AJ” and “Eric.”

Flores said he finally confronted Lazo in September 2015 about the affair, which she denied at first but later admitted to after he showed her the evidence he found online. The confrontation led to a heated argument that ended with Lazo leaving their house.

He now believes Lazo is sharing an apartment with Menorca, based on the blog entries.

Flores said he tried contacting his wife after they separated in September, but could no longer reach her through her mobile phone. He decided to file the adultery case when he saw more photos of the two together on a Facebook post on Feb. 9.

Asked if he ever confronted Menorca about the affair, Flores said he preferred that they face each other in court.

Menorca was arrested last month for three cases of libel, two of which were filed in Mindanao and the third in Cavite. He has been released on bail.

Reached on the phone on Friday, Menorca exclaimed: “Look at the timing! Wow!”

“Right now, no comment; they are digging up dirt and fabricating stories against me. I already talked to my lawyers about that,” he said, adding that he had no idea how Flores could prove his allegations.

Menorca, who got married in 2012, said he counted the couple among his “acquaintances.” He declined to talk further about Lazo, saying it would be unfair to her. With a report from Aie Balagtas See

Read Next
Papadom’s widow slain, dumped on Makati road
EDITORS' PICK
Cebu City closes its borders
BREAKING: 1,075 people in PH has coronavirus disease – DOH
Style and music journeys with Claudia Barretto
DILG to stranded workers: ‘Stay where you are’ until Luzon-wide quarantine is over
UP-PGH wards for COVID-19 patients finished in 5 days
IATF: Food firms to operate with 50% of workforce during Luzon quarantine
MOST READ
Pacquiao to seek probe on leaked private letter from Barangay Dasmariñas
Processing and release of 2020 UPCAT results suspended due to ECQ
Tootsy Angara bares neighbor wanted them out of village
593 health volunteers sign up to fight COVID-19, says DOH
Don't miss out on the latest news and information.