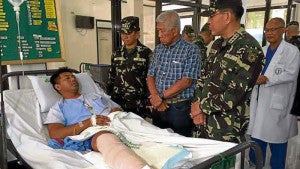 “The group of Asnawi has been helping the soldiers. They have been securing some areas as blocking force, day and night. We know the people are getting tired, some are hungry and we cannot move a lot, but we respect this because we want peace here,” the source said.

Macasero also admitted that one of the three arrested Abu Sayyaf suspects in Baguindan was Jong Aujal, a member of the local ceasefire monitoring force, who has been hospitalized after being allegedly tortured by soldiers from the Philippine Marines.

More than 100 Abu Sayyaf bandits led by Isnilon Hapilon were the targets of the April 9 operation, Tan, the Wesmincom spokesperson, said.

Government troops were able to overrun a 25-bunker camp on Tuesday.