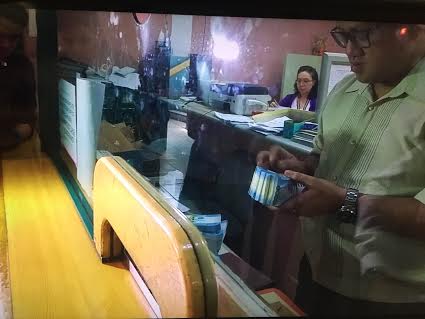 Former Apec Representative Edgar Valdez was granted bail from plunder by the Sandiganbayan as he faces trial over the pork barrel scam.

The anti-graft court Fifth Division granted the bail petition of Valdez and allowed him to post P1.5 million bail from plunder and P210,000 from seven counts of graft for a total bail amount of P1.71 million.

The division granted Valdez’s petition not long after the Fourth Division also granted the bail of dismissed Masbate governor Rizalina Seachon-Lanete from plunder over the scam.

Valdez was granted bail since he surrendered and was detained at Camp Bagong Diwa in Bicutan, Taguig on March 2015.

The court also granted the bail petition of accused mastermind Janet Lim-Napoles in both Valdez and Lanete’s case.

However, Napoles cannot be released yet because her bail had been denied in the cases of Senators Ramon Revilla “Bong” Jr. and Jose “Jinggoy” Estrada and Juan Ponce Enrile.

She is also serving life sentence at the Correctional Institute for Women in Mandaluyong after being convicted for the serious illegal detention of whistleblower Benhur Luy.

Both Valdez and Lanete can now walk free after being detained for over a year at the Camp Bagong Diwa in Taguig.

In the court resolution promulgated Wednesday, the court said the prosecution only proved that Valdez received P2.6 million kickbacks from the Napoles’ foundation Social Development Program for Farmers Foundation (SDPFFI).

The court said the prosecution failed to prove that the rest of Valdez’s alleged P57 million kickbacks could be traced to the other foundations of Napoles.

“For purposes of bail, to find that the evidence of guilt is strong against the accused Valdez that he amassed, accumulated and acquired by himself the total amount of P57,787,500 representing commissions and kickbacks from foundations and NGOs controlled by Napoles… when the evidence produced by the prosecution showed that the amount received by Cong. Valdez from SDPFFI was P2,627,500 and no other evidence was adduced to prove that part of P57,787,500 came from MAMFI and PSDFI, would violate his right to be informed of the nature and cause of the accusation against him,” the court said.

The court also said the charge information against Valdez included the alleged P8.5 million kickbacks in 2010 although the information only charged Valdez for his transactions from 2004 to 2009.

“To further exclude the following amounts under the 2004 up to 2009 transactions from the P57,787,500 would bolster the fact that the prosecution failed to prove the third element of plunder (the threshold amount of P50,000,000),” the court said.

The court clarified however that the grant of bail is not a final judgement on the case.

The Fifth Division granted Valdez’s bail after it earlier denied the same petition by Estrada, who is detained for plunder at the Philippine National Police Custodial Center.

In its indictment against the former congressman, the Ombudsman said Valdez endorsed his PDAF-funded projects to Napoles-controlled foundations to earn P57.787 million in kickbacks from 2004 to 2010.

Payoffs were allegedly made at Napoles’ office in Ortigas.

“(The) PDAF of Valdez was never used for the intended projects as these were considered ‘ghost’ projects, with fabricated documents submitted for its liquidation,” the Office of the Ombudsman said.

The Ombudsman noted that “The mayors and municipal agriculturists reported that they never received anything from the office of Valdez, or from any of the project partners.”

Senators Estrada and Revilla remained detained at the Philippine National Police Custodial Center after their bail petitions were denied by the Sandiganbayan.

Another accused Senator Enrile was released from hospital detention after the Supreme Court allowed him to post bail on humanitarian grounds. CDG/RAM