Texas teacher arrested after getting filmed slapping a student in class 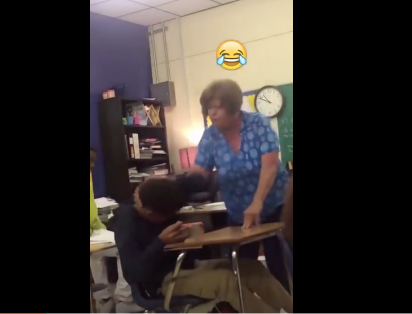 A 63-year-old high school teacher in Texas will be facing assault charges after a video showed her repeatedly slapping and berating a student in Ozen High School in Beaumont, Texas.

In a nine-second video, the teacher identified as Mary Hastings attacked his student while calling the boy an “idiot” after an apparent disruption in the class early this week.

Hastings can be seen violently throwing papers from the student’s desk before striking the teenager in the head for five consecutive times.

The baffled victim, however, had no idea what caused the punishment.

“Because you’re stopping him from graduating, you idiot (expletive)!,” said the enraged teacher.

Hastings then seemed to repeat the student’s tone—albeit in a mocking manner—leaving the classroom full of teens in hysterical laughter.

Meanwhile, the Beaumont Independent School District released a statement via USAToday condemning child abuse, noting the teacher was immediately removed from the classroom after the incident and was placed on administrative leave.

“The Beaumont Independent School District can confirm that an Ozen High School teacher was arrested today for physically assaulting a student,” wrote the district.

“The conduct was substantiated by video footage viewed by BISD police and administration.”

Hastings was arrested on a single assault charge according to Jefferson County Sheriff’s Office, but is currently released on bail as of this story’s writing. Khristian Ibarrola,INQUIRER.NET