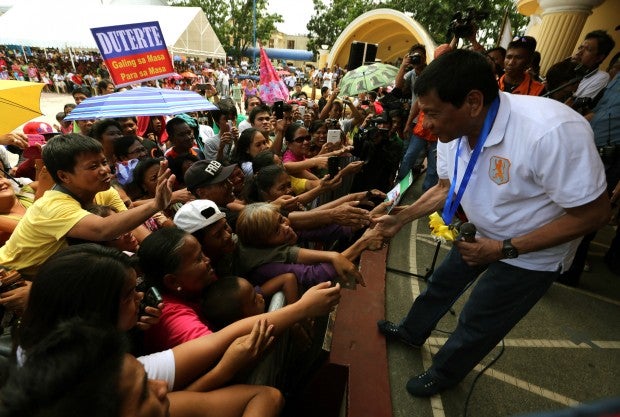 DAVAO CITY, Philippines – Presidential aspirant Rodrigo Duterte on Saturday, urged the thousands of people who attended his rally in Buluan, Maguindanao, to help him fix Mindanao if he wins in the May 9 elections.

“Let us fix Mindanao,” he said.

His speech was frequently interrupted by shouts of “Allahu Akbar” or “God is great.”

To fix Mindanao, Duterte said there was a need “to configure the government” and “correct the historical injustice committed against the Moro people.”

He said the current unitary system of government has caused misery in Mindanao because it has allowed the national government to control resources and the distribution of wealth.

“This unitary government has been using up all our money,” he said.

He cited how Mindanao continues to suffer from underdevelopment despite its rich natural resources.

“I have not seen a Moro with a big business. We are all poor,” he added.

He then asked the crowd to help him. “I am pleading with you, let us fix this. We belong to one nation,” he said.