Roxas twits Duterte: Next president should be role model to youth | Inquirer News

Roxas twits Duterte: Next president should be role model to youth 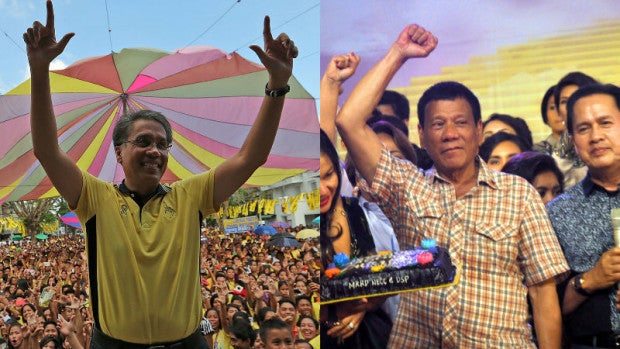 The word war between administration bet Mar Roxas and Davao City Mayor Rodrigo Duterte rages on, with the Liberal Party standard-bearer saying that the next Philippine president should be decent and a good example to the Filipino youth.

Roxas slammed anew Duterte’s brand of justice, saying that the tough-talking local executive known for his iron-fist style of leadership was concerned only with what he believes is right.

(Whatever is ingrained in his mind, whether it’s right or wrong, true or not, it is what he believes in. For me, that is not the brand of leadership we want for our country.)

(What is he, judge, jury and executioner? Does he have the monopoly of righteousness? That is now how the Philippines and Filipinos are.)

READ: Roxas on Duterte’s ‘name-calling’: Is that all he can say?

Duterte, who previously declared in public that he had killed criminals in his turf, was dubbed as “The Punisher” due to his approach toward crimes in Davao and his alleged links to the Davao Death Squad.

Despite lagging in recent preference surveys, Roxas said he was confident that the voting public would elect a decent Filipino as president who would represent the country well in the international scene.

(If he learns of problems or those which and who do not agree to his opinions, should he just curse at them? That is not how we lead the country, and that is not the example we want to set for the youth.)

Duterte, who vowed to curb drugs and crimes within three to six months should he win the presidency, recently tagged Roxas as “bayot” (a weakling, according to his camp) after questioning the plausibility of his campaign promise.

READ: Duterte warns criminals: I am not kidding

Echoing Roxas, LP spokesperson Rep. Barry Gutierrez said the Philippines needs a decent leader who understands the plight of the poor and uplift their lives, and not someone who would kill them.