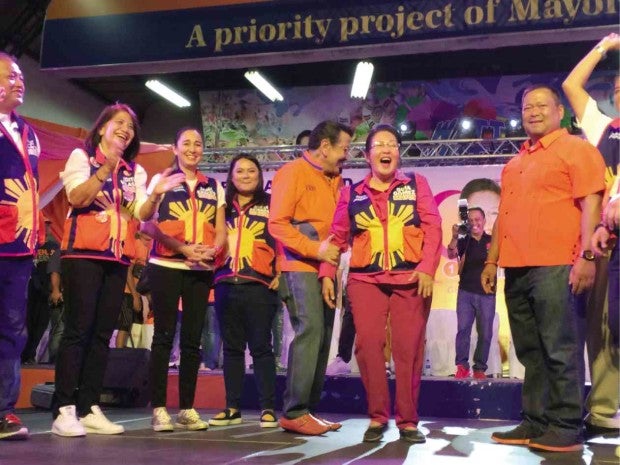 MEMBERS of the Ejercito-Estrada clan in San Juan City staged a show of force Saturday night in support of reelectionist Mayor Guia Gomez, whose hold on the local government may be facing its toughest challenge in the May 9 elections.

Former president and now Manila Mayor Joseph Estrada, with whom Gomez has a son, Sen. JV Ejercito, led the cheering squad during her proclamation rally that drew a crowd of around 8,000 at the city’s Plaza ng Masa.

Gomez is being challenged for the mayoralty by a former political ally of the family, Vice Mayor Francis Zamora.

“This is where my political career began. I can never forsake San Juan,” Estrada said onstage. Also in attendance were Senator Ejercito and Precy Estrada, wife of his stepbrother and fellow senator, Jinggoy Estrada.

Currently detained on plunder charges stemming from the 2013 pork barrel scandal, Sen. Jinggoy Estrada expressed his support for Gomez through a video message. The Sandiganbayan, which is hearing his criminal case, earlier denied his request to attend the proclamation rally of his daughter Janella, a city councilor now running for vice mayor.

A week into the campaign period for local candidates, the Zamoras have hurled allegations of bad governance at the Gomez camp. At Saturday’s rally, Gomez hit back by saying that if there were any anomalies in the city—like the alleged mismanagement of the San Juan Medical Center, as claimed by the Zamoras—then her accusers were also responsible since they were part of her administration.