After UP, UE buildings, chapel also burn down 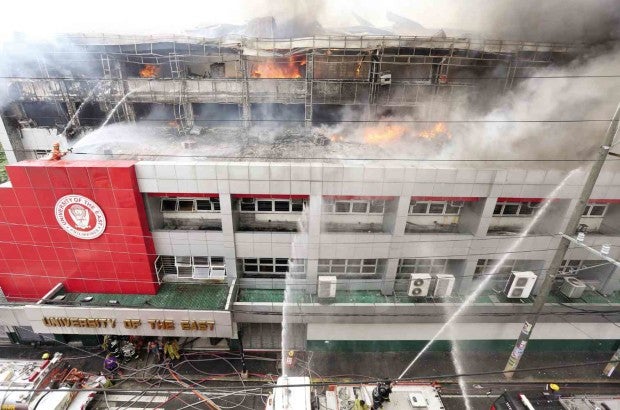 U-BELT BLAZE Firefighters aim their hoses from atop and below one of the burning buildings of the University of the East on Saturday. MARIANNE BERMUDEZ

IT WAS a week when firefighters got busy, from one campus to another.

But it was more difficult for Ma. Christina Apple Martinez, a volunteer firefighter, who was shocked to learn that her team was responding to an emergency at the very school where she graduated.

“I never thought it would be my alma mater,” said Martinez, a 2014 alumna of the University of the East (UE), where a fire destroyed two buildings and partially damaged a third structure in just about two hours on Saturday morning.

The blaze broke out a day after the faculty center of the University of the Philippines (UP) in Diliman, Quezon City, also went up in flames. Friday’s 10-hour fire was the third to hit the premier state university in nine months.

There were no classes and only maintenance workers and security guards were in the buildings when the fire started at 9:35 a.m., the official added. At least one fireman sustained a hand injury.

The cause of the fire remained under investigation but Ramirez cited reports that there were welders working on the second floor of the CAS building that morning.

Martinez, who later posted photos of the UE fire on her Facebook page, said it broke her heart to find herself battling the flames from behind the CAS building, where she had attended classes as a broadcast communications student.

In a statement, the UE administration said the Manila campus would remain closed to students and visitors on Monday, with the reopening date to be announced later.