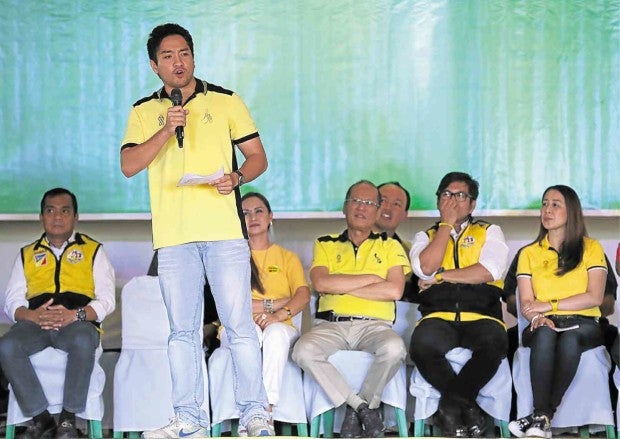 STA. ROSA, Laguna—The 22-year-old son of Liberal Party (LP) standard-bearer Mar Roxas on Thursday went on the stump for the first time since the election campaign began over a month ago.

Paolo Roxas, who shared the stage with President Benigno Aquino III and local LP candidates in Laguna, stood out with his height, good looks and well-toned physique.

Except for stumbling over a few Tagalog words just like his father, the young Roxas appeared confident speaking before some 2,000 people gathered at the Garden Plaza Events Center here.

He alternately referred to his father as “Dad” and “Tatay” in his speech.

Paolo is Roxas’ son from a previous relationship. The presidential candidate is married to newsreader Korina Sanchez.

The Yale University student is expected to be seen more often in campaign sorties with the President.

“Many people are discrediting my father. There is so much black propaganda. But they only want to blot out what my Dad has done. But you know, each time they say a lie about my father, all the more that his integrity and honest service are highlighted,” Paolo said in Filipino.

Paolo recounted how he once stood with his father before the tombs of President Manuel Roxas, the late Sen. Gerry Roxas, and the late congressman Dinggoy Roxas. He said his father had told him on that occasion that none of these three forebears were ever accused of corruption “and that was something to be proud of because politics is full of temptation.”

The late President Roxas was Mar Roxas’ grandfather, the late senator his father, and Dinggoy, the late Capiz congressman, was his brother.

“Dad said he encountered temptations in politics himself but he resisted them because giving in to them meant letting down his grandfather, his father, his brother, and me,” said Paolo.

“He told me that more than the name Roxas, I will inherit from him his integrity,” the young man added.

Paolo said his father’s words had an impact on him.

“It explained why in his 22 years in public service, not once has he been accused of corruption,” he said.

He said that being the country’s next President is a “serious” matter for his father because “it is the lives and the future of the people at stake.”

“My father’s platform includes three things: freedom from hunger… freedom from fear… and having the freedom to dream,” Paolo said.

He said that to be freed from hunger, his father promises employment for Filipinos, in addition to the one million jobs generated by the call center industry that Roxas helped established in the country.

For people to dream, Paolo said his father would ensure that there would be education and jobs for all to promote equality and give everyone a chance to have a better life.