Roxas on comic book: I didn’t approve it, but it’s accurate 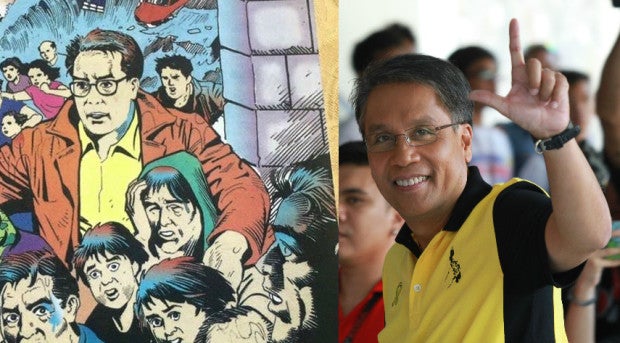 GENERAL NAKAR, Philippines—Liberal Party (LP) standard-bearer Mar Roxas on Tuesday distanced himself from the creators of a comic book that depicted his role in the aftermath of Supertyphoon “Yolanda” in a heroic light.

Roxas said he could not remember seeing or approving the release of the comic book, “Sa Gitna ng Unos” (In the Eye of the Storm), which he implied was made by his supporters without his knowledge.

“I don’t know. Many materials are coming out,” he said when asked if he had seen or approved it.

“Comics is part of our culture, of regular and conventional campaigns,” he told reporters in a chance interview here after a visit to a livelihood center.

The former interior secretary became the object of online ridicule after portions of the comic book circulated on social media, with many netizens making fun of or commenting scathingly on its contents.

The comic provided details of Roxas’ life story and record in public service, culminating in a sensational scene that dramatized where he was and what he did when Tacloban City was inundated by storm surges in November 2013.

Some observers were irked at the heroic portrayal of Roxas, who had come under heavy fire in the aftermath of the Yolanda devastation for the slow government response to the calamity.

Roxas, however, suggested that the scenes depicted in the comic book were accurate.

“I thank our supporters for making [this comic book] and explaining what really happened [during Yolanda],” he said.

Asked if he saw nothing wrong, Roxas said: “What do I tell them (supporters)—to stop?”

He seemed piqued by the persistent questioning, at one point asking one reporter, “Is this the biggest issue?”

At the end of the interview, he said the day’s real issue was the money-laundering case involving $81 million stolen from the Bangladesh central bank that was funneled into the Philippine banking system.

Militant lawmakers are demanding that Roxas pull out all copies of the controversial propaganda comic book.

Bayan Muna party-list member Neri Colmenares, a senatorial candidate, said the LP’s full-color, 28-page comic book was a “glaring insult” to the victims of Yolanda because it used “lies not only to prop up his candidacy but also to revise history.”

Anakpawis party-list Fernando Hicap described the comic book as “the most disturbing political ad” of Roxas.

Hicap claimed that Roxas’ mishandling of the goverment’s preparations and rescue efforts in the Eastern Visayas, particularly Tacloban City, has been widely documented.  With Gil Cabacungan