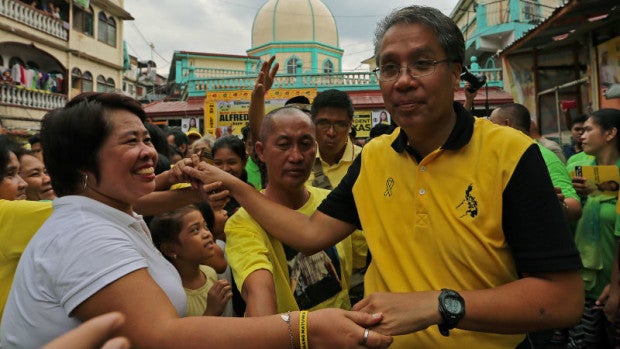 Voters should be conscientious in choosing the next occupant of Malacañang as President Benigno Aquino III’s successor would be appointing 10 magistrates of the 15-member Supreme Court.

Liberal Party (LP) presidential contender Mar Roxas issued this reminder at a dialogue with business leaders hosted by the Makati Business Club and the Management Association of the Philippines in Makati City on Wednesday.

In his speech, Roxas said systemic problems in the country’s judicial system had not been thoroughly addressed by the candidates in the May 9 general elections.

He said resolving the issues besetting the judiciary would help “unleash the energies of the private sector of our economy.”

“The next President gets to appoint 10 Supreme Court justices. The wrong choice might mean that black becomes white and white becomes black or red becomes blue and blue becomes red. Because they can interpret (our laws),” Roxas said in a serious tone.

Mr. Aquino, who was voted into office in 2010, has so far named six of the 15 members of the high court, which has the constitutional mandate as the final arbiter of all judicial questions.

While there is a public perception that a sitting President’s appointees would just be his rubber stamp in the high court, the magistrates designated by Mr. Aquino voted against several of his executive and legislative agenda, among them the legality of the Disbursement Acceleration Program.

Roxas also raised his concern over the failure of the judiciary to immediately resolve legal woes, which, he said, had practically held hostage some P3 trillion in assets.

The LP standard-bearer said this problem rendered the “assets locked up in litigation” useless for the economy.

“They cannot be transacted. They cannot be propagated. Nothing could be done to them because they’re locked up in litigation,” he said, adding:

If elected President, Roxas said he would push for the holding of “continuous trial” to resolve court cases as soon as possible.

The delays in the judicial process, he said, were even more detrimental to poor Filipinos who could barely afford a lawyer to defend their interests.

Roxas said he initiated close coordination among the main pillars of the judiciary—the Supreme Court, the Department of Justice and the Department of the Interior and Local Government—to expedite the trial of criminal cases.

He said these pillars were able to harmonize the judicial processes through the “justice ecozone,” which was first implemented in Quezon City, referring to the system used in economic zones.

“That’s what we’re going to do for the rest of the country. That way you can have meaningful justice all across our country,” he said, drawing applause from the crowd.