Sherwin Gatchalian: Being Filipino not about bloodline | Inquirer News

Sherwin Gatchalian: Being Filipino not about bloodline 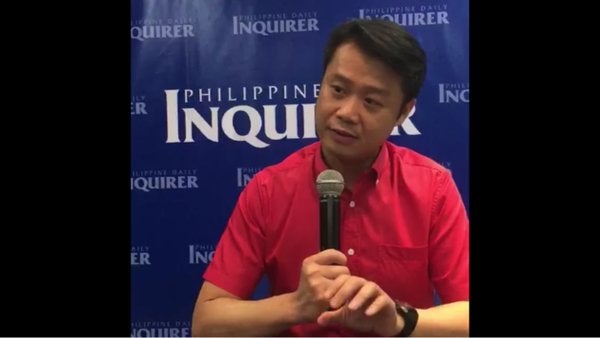 MAKATI CITY, Philippines—“Being a Filipino is not about your blood. It’s about where your heart belongs.”

This was the response of senatorial candidate Valenzuela Representative Sherwin “Win” Gatchalian during a Facebook live interview with the Inquirer in Makati Wednesday night after a netizen accused him of not being a “true Filipino” due to his Chinese ancestry.

“They are [Filipinos] but they are of Chinese lineage. My grandparents are the ones who were born in China.”

Gatchalian lamented having such questions hurled against him throughout the campaign trail.

“It’s often used to attack, it’s not asked because of curiosity,” he said.
Gatchalian added that he would not have been allowed to run and win five elections if he wasn’t a Filipino citizen.

He countered that looks cannot be the sole defining trait of a Filipino, pointing at a staffer of the Inquirer in the room as an example.

“If you define Filipino as a certain stereotype, then both of us are not Filipinos,” he said.

The congressman also mentioned that some individuals are using the issues surrounding “Partido Galing at Puso” (PGP) standard-bearer Senator Grace Poe’s status as a foundling to attack him.

“And that’s the sad part,” Gatchalian said. “Some people are still very shallow-minded that they use Grace as a means to attack your candidacy.”

Gatchalian is currently running under the senatorial slate of the PGP coalition headed by Poe and her running mate Senator Francis “Chiz” Escudero.

Despite this, the congressman praised the Filipino people as “one of the most diverse in terms of race and nationality.”

“This is our strength,” Gatchalian said. “I’m very happy that in our country, discrimination is very low.” RAM

The #INQLive Q&A sessions are a series of interviews with senatorial candidates leading up to the May elections. Follow Inquirer.net on Facebook to watch the sessions live.