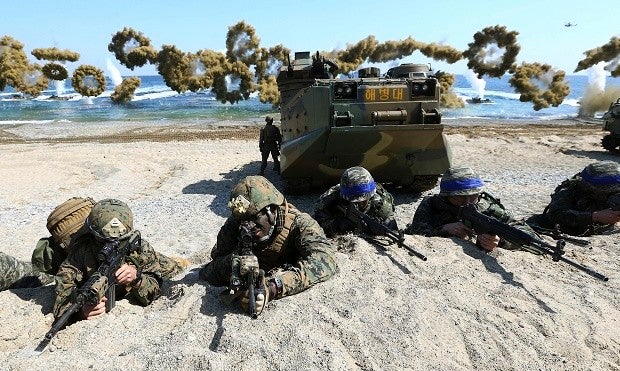 In this March 12, 2016 file photo, US Marines, left, and South Korean Marines, wearing blue headbands on their helmets, take positions after landing on the beach during the joint military combined amphibious exercise, called Ssangyong, part of the Key Resolve and Foal Eagle military exercises, in Pohang, South Korea. It’s a demand North Korea has been making for decades: The US and South Korea must immediately suspend their annual military exercises if they want peace on the Korean Peninsula. And, once again, it’s a demand that is falling on deaf ears. This year’s exercises are bigger than ever before and reportedly include training to take out Kim Jong Un himself. For Pyongyang’s ruling regime, that’s a bridge too far. But probably not far enough to fire the first shots over. AP

PYONGYANG, North Korea — It’s a demand North Korea has been making for decades: The United States and South Korea must immediately suspend their annual military exercises if there is to be peace on the Korean Peninsula. And, once again, it’s a demand that is falling on deaf ears. Following the North’s recent nuclear test and rocket launch, this year’s exercises are bigger than ever.

In the Koreas, the cycle of tensions is as predictable as the changing of the seasons — they surge every spring, when Washington and Seoul hold their annual Key Resolve and Foal Eagle military exercises. This year’s drills, which are to continue through April, are not only bigger but also reportedly include for the first time training for precision strikes directed at the North’s leadership and Kim Jong Un himself.

In the eyes of North Korea’s ruling regime, that is a bridge too far.

Even before the exercises began, North Korea’s formidable propaganda machine had been churning out articles every day condemning the United States and South Korea in the strongest terms, displaying nuclear bomb and missile mock-ups and warning it is ready at any time to launch a pre-emptive strike against the presidential residence in South Korea or even a nuclear attack on the US mainland.

Nightly news programs have been dominated by videos of leader Kim watching North Korea’s own drills, replete with large-scale artillery arrays firing barrages from beachfront positions into the ocean and repeated claims that the North now has an H-bomb — which it says it tested in January — and a means of taking the war to the US mainland.

“This isn’t just military training,” Kim Il Sun, a teacher at the Pyongyang Tourism University, said of the US-South Korea military activities going on just south of the Demilitarized Zone as she headed home after work on Wednesday.

“These are war exercises aimed at a nuclear war against our country,” she said. “They are preparing to attack us.”

Gauging the true level of concern among North Koreans as their government whips up anti-US and anti-Seoul feelings is always difficult.

North Korea has been in a state of virtual martial law since its founding and North Koreans are accustomed to the rise and fall of tensions and the threat — real or perceived — that their country is on the verge of being invaded. Apart from the war-like talk on the news and the more-than-usual number of missile and rocket tests, life in the capital continues to be business as usual, although the whole nation has been mobilized for a 70-day loyalty drive aimed at boosting production ahead of a major political meeting to be headed by Kim in May.

There are also strong signals that North Korea doesn’t see the situation as serious enough to go to war over.

Despite threats it is fully prepared to carry out a pre-emptive strike and conduct a “sacred war of reunification,” the government has repeatedly insisted it will only attack if provoked. Ultimately, it says, what it really wants is to sit down with the United States to formally end the 1950-53 Korean War, which concluded in an armistice, not a peace treaty.

Such talk has always been a non-starter in Washington.

The longstanding US demand has been that North Korea must either give up its nuclear program or verifiably demonstrate it is willing to do so before any serious discussions can begin. North Korea wants talks first since it says the threat of a US invasion is what forced it to develop a nuclear deterrent to begin with.

Washington did suspend an earlier version of the joint military exercises in an attempt to make progress with North Korea.

But that was back in 1992 and there is no sign of that happening again soon, with tensions on the Korean Peninsula worse than usual and the US and South Korea leading efforts to impose new sanctions on the North.

In the meantime, officials here say, the ball is in Washington’s court.

Jon Min Dok, director of the Institute for Disarmament and Peace, part of North Korea’s Ministry of Foreign Affairs, told an AP Television News crew in a rare interview this week that “as long as the US persists in its moves to stifle our socialist system” North Korea has no intention of backing down.

“We consider that keeping the balance of force by bolstering our nuclear forces is the only way effectively to deter the persistent nuclear threat and war provocations from the US,” he said.