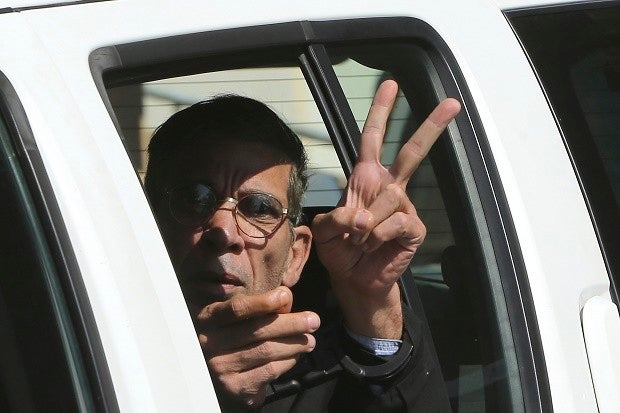 EgyptAir plane hijacking suspect Seif Eddin Mustafa flashes the victory sign as he leaves a court in a police car after a remand hearing as authorities investigate him on charges including hijacking, illegal possession of explosives and abduction in the Cypriot coastal town of Larnaca Wednesday, March 30, 2016. Mustafa described as “psychologically unstable” hijacked a flight Tuesday from Egypt to Cyprus and threatened to blow it up. His explosives turned out to be fake, and he surrendered with all passengers released unharmed after a bizarre six-hour standoff. AP

LARNACA, Cyprus — First the hijacker said the women could leave. All the children, too. Then the man in the suicide vest agreed that all Egyptians and others from Muslim backgrounds would be allowed to escape from the plane.

That left five Western men — at least one of whom thought they were about to die.

“We looked each other in the eyes and we said: Here we are. We’re at the end of the line. It’s over,” recalled the Italian in the group, Andrea Banchetti, the day after an Egyptian man took control of a short EgyptAir flight to Cairo by donning a fake explosives belt and diverting it across the Mediterranean to Cyprus.

Seif Eddin Mustafa, 59, was arrested by Cypriot police Tuesday without physically harming a soul. The final five from Britain, Italy and the Netherlands were ultimately released just like the others. A day later, passengers openly second-guessed themselves over whether they had been right to feel terrified, skeptical or somewhere in between.

“I was going out of my mind,” said Banchetti, a 47-year-old mechanic from the Italian city of Genoa, recalling those confused, nerve-racking final minutes as the plane emptied with only the five men kept on board. They had been singled out after the hijacker confiscated their European passports.

Not all expressed such open fears. The Dutchman on board, 56-year-old businessman Huub Helthuis, said when he talked to Mustafa once the plane had landed, the Egyptian replied in English: “Don’t worry, nothing will happen.” He eyed Mustafa’s vest of mysterious pockets and tangled wires and wondered whether they were real.

“The bombs were fake,” he recalled Wednesday in a telephone interview from Amsterdam, “but you couldn’t know that.”

While the plane was still airborne, flight attendants and the pilots said they tried to speak informally to Mustafa, offering him drinks and making small talk. The pilot, Amr Al-Gammal, said the hijacker even let him choose whether to land in Turkey, Greece or the nearest choice, Cyprus.

The atmosphere grew sufficiently informal and relaxed that one of the English passengers, 26-year-old health and safety inspector Ben Innes, posed for a wide-grinning photo alongside the self-billed bomber.

“I’m not sure why I did it. I just threw caution to the wind while trying to stay cheerful in the face of adversity. I figured if his bomb was real I’d nothing to lose anyway, so took a chance to get a closer look at it,” Innes was quoted as telling The Sun newspaper in London.

“I got one of the cabin crew to translate for me and asked him if I could do a selfie with him. He just shrugged OK, so I stood by him and smiled for the camera while a stewardess did the snap,” Innes was quoted as saying.

Some fellow hostages said they thought Innes had been a reckless imbecile.

Banchetti told La Repubblica newspaper in Rome that he’d wanted to slap Innes across the face.

“How do you go up to him that way and take a photo of him? ‘Are you a fool?’ I said in English,” Banchetti recalled.

On Wednesday, Egypt General Prosecutor Nabil Sadek formally requested Mustafa’s extradition from Cyprus. But a Larnaca court ordered that he should remain in local police custody for eight days to assist Cyprus’ own investigation.

Lambrianou said no confirmed explosives were found, but police did recover unidentified liquids in a container and in his bag. The allegation regarding explosives could be dropped if the liquid turns out not to be an explosive.

The prosecutor said after Mustafa was arrested, he told police: “What’s someone supposed to do when he hasn’t seen his wife and children in 24 years and the Egyptian government won’t let him?”

Egypt’s interior ministry said Mustafa had a long criminal record but had finished serving a one-year prison term in March 2015. An official at the general prosecutor’s office, speaking on condition of anonymity because he was not authorized to speak to the press, said Egypt imposed no travel ban on Mustafa.

A Cypriot police official told the AP that Mustafa’s criminal record on the island stretched back to 1988, when he was convicted on six counts of forging passports and given a suspended sentence. He was deported to Egypt following domestic violence charges by his then-Cypriot wife.

He re-entered Cyprus on an assumed Qatari identity, but was tracked down and again deported to Egypt in 1990. Mustafa and his Cypriot wife divorced in 1994. The couple had four children but one child is dead, according to a relative who didn’t want to be identified by name discussing family matters.

After Wednesday’s court hearing, a handcuffed Mustafa flashed the “V” for victory sign out the window of a police vehicle as he was driven away.

Cypriot officials have described Mustafa as psychologically unstable, citing his bizarre set of demands to police negotiators. Lambrianou said Mustafa had wanted a letter delivered to his Cypriot ex-wife in which he demanded the release of 63 female political dissidents imprisoned in Egypt.