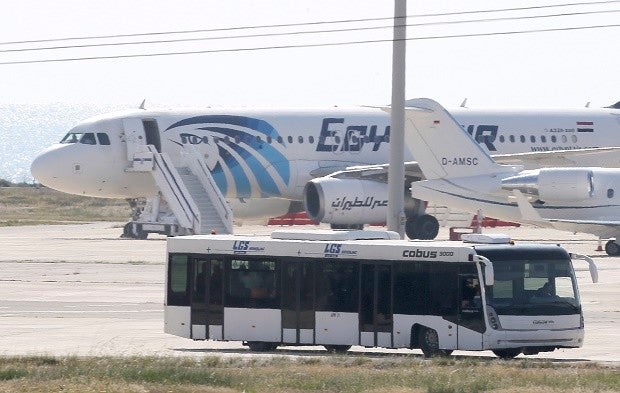 A bus carrying some passengers from a hijacked EgyptAir aircraft drives by the plane at Larnaca Airport in Cyprus Tuesday, March 29, 2016. The EgyptAir plane was hijacked on Tuesday while flying from the Egyptian Mediterranean coastal city of Alexandria to the capital, Cairo, and later landed in Cyprus where some of the women and children were allowed to get off the aircraft, according to Egyptian and Cypriot officials. AP

NICOSIA, Cyprus — An EgyptAir plane was hijacked on Tuesday while flying from the Egyptian Mediterranean coastal city of Alexandria to the capital, Cairo, and later landed in Cyprus where all passengers except four foreigners were allowed to get off the aircraft, according to Egyptian and Cypriot officials.

The hijacker, who was later identified as an Egyptian man, apparently had a suicide belt with which he threatened the plane’s pilot.

The Airbus flight number MS181 had 55 passengers on board and was flying on a regular route when the hijacking took place, the Egyptians said. Egyptian state television said there was a lone hijacker and identified him as Ibrahim Samaha. It gave no further details.

The plane took off from the small Bourg el-Arab airport just outside the Mediterranen port city of Alexandria. It was flying a regular route to Cairo, a flight that normally takes up to 30 minutes.

Details were sketchy and the hijacker’s motives were also not known, but an Egyptian Aviation Ministry statement said the “hijacker” threatened that he had a belt of explosives, the weapon of choice for Islamic militants in the Middle East.

Shortly after the hijacking, the plane landed at the airport in the southern Cypriot city of Larnaca, also on the Mediterranean. Cypriot officials said there were suspicions of a bomb on board.

The official later said the hijacker later allowed an unspecified number of women and children to go free and some were disembarking. EgyptAir later said in a statement that all passengers were released by the hijackers except for the crew and four foreigners. It did specify the nationality of the foreigners.

Initially a second Cypriot official said there “seems like there’s more than one hijacker” and that there were no other demands made expect that police vehicles move away from the aircraft. All the officials in Egypt and Cyprus spoke on condition of anonymity because they were not authorized to speak to the media.

The hijacking, however, will most likely bring to the fore again the question of security at Egyptian airports, five months after a Russian aircraft crashed over Egypt’s Sinai Peninsula minutes after it took off from Egypt’s Red Sea resort of Sharm el-Sheikh. All 224 people on board were killed in the crash. Russia later said an explosive device brought down the aircraft and the extremist Islamic State group said it downed the plane.