WHO says Ebola international health emergency is over 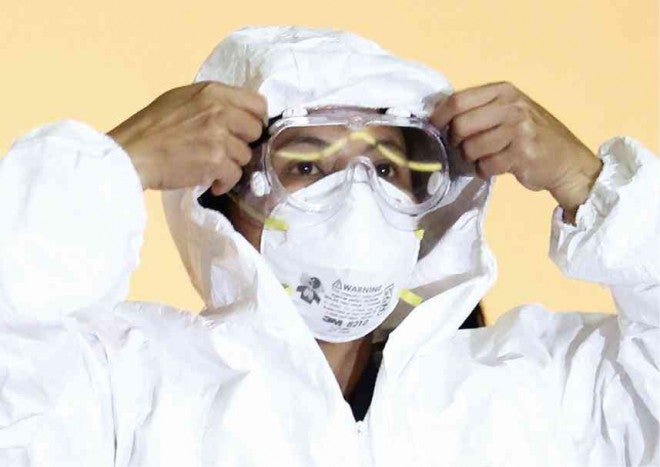 A health worker demonstrates how to wear an Ebola suit at the Research Institute for Tropical Medicine in Alabang, Muntinlupa. NIÑO JESUS ORBETA / INQUIRER FILE

GENEVA, Switzerland — The World Health Organization (WHO) said Tuesday that the Ebola outbreak in West Africa no longer constitutes an international emergency, voicing confidence that remaining isolated cases in the affected countries can be contained.

The deadliest-ever outbreak of the tropical disease emerged in December 2013 and has killed more than 11,300 people, mostly in Guinea, Liberia and Sierra Leone.

The UN’s public health agency faced searing criticism over its initial response to Ebola’s spread, including accusations that it took far too long to publicize the threat level.

Such criticism forced the WHO in May last year to launch a sweeping shake-up of its emergency response systems and saw the organization quickly sound a global alarm this year in response to the rapid spread of the Zika virus.

Chan stressed that all three countries remain vulnerable to Ebola flare-ups, including an ongoing cluster of cases in Guinea, which has left five people dead.

Health authorities in Conakry said last week that 961 people who may have come into contact with the victims in the south of the country were being monitored.

“The risk of international spread is now low, and… countries currently have the capacity to respond rapidly to new virus emergences,” Chan said.

She also warned against complacency towards the virus, which remains in “the ecosystem” in West Africa and said that vigilance was crucial, including quick reactions to new cases.

“Particularly important will be to ensure that communities can rapidly and fully engage in any future response, cases are quickly isolated and managed,” Chan said.

At its peak in 2014, the Ebola outbreak sparked anxiety about a possible global pandemic and led some governments to threaten or unilaterally enforce travel bans to and from the worst-affected countries.

The WHO consistently pushed back against such calls, with Chan again on Tuesday reiterating that “there should be no restrictions on travel and trade with Guinea, Liberia and Sierra Leone, and that any such measures should be lifted immediately.”

WHO has previously said there is a need for testing kits that can be easily deployed to the remote, rural areas where many of the disease’s victims have been concentrated.

Chan underscored that this will require sustained financial support, including to the impoverished West African countries that remain most vulnerable to further outbreaks.