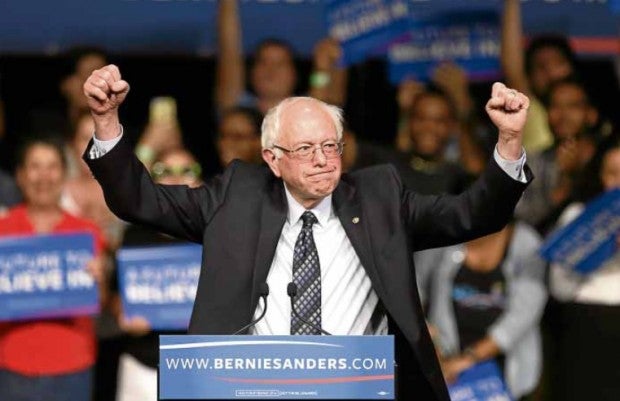 Senator Bernie Sanders rallies supporters upon his arrival at a campaign rally in Miami in this file photo. The Vermont lawmaker won Democratic caucuses in Alaska and Washington on Saturday. AP

SEATTLE, United States — Bernie Sanders won the Democratic caucuses in Alaska and Washington on Saturday, giving his campaign a much-needed boost as he seeks to disrupt Hillary Clinton’s path to the party’s presidential nomination.

US networks projected Sanders winning by wide margins in both western states where 117 delegates are up for grabs — 101 in Washington and 16 in Alaska.

The Vermont senator and the former secretary of state were also facing off Saturday in Hawaii, where 25 delegates are at stake. The results for that contest were expected later in the evening.

Appearing at a campaign rally in Wisconsin, Sanders said his victories in two of the three caucuses where voters turned out in high numbers showed that the tide was turning in his favor.

“We are making significant inroads in Secretary Clinton’s lead and we have … a path toward victory,” he told a cheering crowd.

US networks projected Sanders winning 79.2 percent against 20.8 percent for Clinton in Alaska.

In Washington, he was projected to win 74.6 percent against 25.1 for Clinton.

“What momentum is about is in election after election, winning the overwhelming percentage of young people who are participating,” Sanders told his supporters in Wisconsin. “And by young, I don’t mean just the very young. The older you get, the younger the age appears.”

A win for the Vermont senator in the trio of western caucuses would bring momentum to his campaign as he seeks to dent Clinton’s lead in the race to their party’s nomination.

Going into Saturday, Clinton had already amassed 1,711 delegates, including super-delegates who are unelected by voters, compared to 952 for Sanders, according to a CNN count.

To win the Democratic nomination, 2,383 delegates are needed.

“Real change historically always takes place from the bottom on up when millions of people come together,” Sanders said to applause and cheers from the crowd in the city’s Safeco Field baseball stadium.

“We need a political revolution!”

By contrast, Clinton has already shifted her focus toward November’s general election.

She delivered a somber counterterrorism speech Wednesday in the aftermath of deadly attacks in Brussels, using it as an opportunity to launch vigorous assaults on Republican candidates Donald Trump and Ted Cruz and warn their “reckless” foreign policies would harm US interests.

“We need to rely on what actually works, not bluster that alienates our partners and doesn’t make us any safer,” she said.

Despite the huge gap with Clinton that he needs to fill, Sanders has refused to throw in the towel, repeatedly stressing that his grassroots campaign is heading all the way to July’s nominating convention in Philadelphia.

Saturday’s three contests are caucuses, essentially neighborhood meetings where voters can discuss political platforms and debate the merits of the candidates.

Since they generally require voters to show up in person rather than mailing primary ballots, the format favors Sanders, whose supporters have consistently shown more grassroots enthusiasm.

Millennials and first-time voters have been flocking to Sanders’s message of economic equality, universal health care, and his call to reduce the influence of billionaires on the campaign finance system.

According to RealClearPolitics poll averages, in the remaining states with the three largest delegate allocations — California, New York and Pennsylvania — Clinton leads Sanders by nine points, 34 points and 28 points respectively.